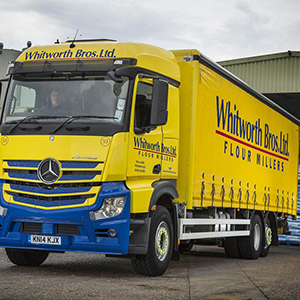 The first Mercedes-Benz Actros to wear the eye-catching livery of flour miller and distributor Whitworth Bros has certainly risen to the occasion, delivering outstanding fuel efficiency and winning a resounding ‘thumbs up’ from drivers.

So impressed is the Wellingborough-based operator that it recently set a second, identical unit on the road, while supplying Dealer Intercounty Truck & Van will grab another slice of the fleet when it delivers two more Actros later this year.

Intercounty Truck & Van has also supplied Whitworth Bros with a 26-tonne Antos 2536 with uprated, 9.0-tonne front axle, which entered service a year ago, and a new, 7.5-tonne FUSO Canter 7C18 – Mercedes-Benz Dealers are additionally responsible for sales and support of the popular Japanese light truck range in the UK. Both rigids have curtainside bodies by Kurt Hobbs Coachworks, of Northampton, and are on multi-drop work.

The two vehicles scheduled for delivery in October will also operate from Whitbros Bros’s Wellingborough site, and be used to deliver flour in tipping powder tank trailers to customers nationwide. Both will be 2445 StreamSpace variants with small-wheeled mid-lift axles which, as well as saving weight, will free up extra space on the chassis to accommodate Gardner Denver’s blowing equipment.

Established in 1886, Whitworth Bros remains a traditional family business with traditional values, but sets its sights firmly on the future and invests heavily in cutting-edge technology, so that its mills are among the most advanced in the world.

The company runs a mixed-marque fleet of approximately 70 trucks, the vast majority of which are tractor units. Its first Mercedes-Benz vehicle, an Axor tractor, was in service from 2010-2013, when it reached the end of its contract. It was, said Regional Distribution Manager Colin Spurrier, “The most reliable vehicle on the fleet.”

Whitworth Bros commissioned its first Actros, a Euro 5 model, in October 2014. “That truck has been a reat success,” confirmed Mr Spurrier. “At around 9 mpg the fuel returns are as good as, if not better, than anything else on the fleet.

“Just as importantly, given the company’s commitment to retaining our best staff, driver feedback on the Actros has also been exceptionally positive – they really appreciate the vehicle’s comfortable, well laid out cab.”

Whitworth Bros’s latest trucks are the subject of CharterWay contract hire agreements from
Mercedes-Benz Financial Services, under which inspections and servicing are being undertaken by Intercounty Truck & Van’s factory-trained technicians.

“We are a very image-conscious company and like to keep the fleet looking smart – our new Mercedes-Benz vehicles have already attracted lots of compliments from customers and others who’ve seen them on the road,” added Colin Spurrier.

“All of our trucks are contract-hired because as well as offering the predictable costs that allow us to budget with confidence, this acquisition method means we get new vehicles every five years.”