There’s no business like snow business for Anthony Betts Mitsubishi 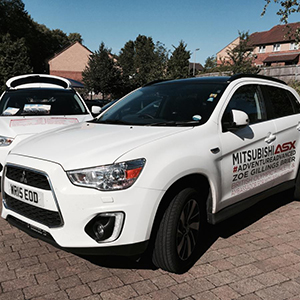 A Mitsubishi dealer in Hemel Hempstead threw its weight behind a special event in the town aimed at encouraging British skiing and snowboarding stars of the future.

Anthony Betts Mitsubishi was at The Snow Centre to support The Mitsubishi Motors Ski & Snowboard Talent ID Series, which has been devised by Mitsubishi Brand Ambassador and three-times British Olympic Snowboard Cross athlete Zoe Gillings-Brier along with a team of specialist coaches.

The talent-spotting programme has been at various venues this spring and summer, in conjunction with Mitsubishi Motors UK, and the London Road dealership took along the smart and efficient compact crossover that is the Mitsubishi ASX to the St Albans Hill venue to sit alongside the ASX being used by Zoe in her role as Brand Ambassador. In addition, Richard Ginn, who handles offsite promotions for Anthony Betts Mitsubishi, was on hand to help with enquiries.

Dealer Principal Anthony Betts said: ‘There were quite a few people there and it was certainly successful. There’s a cracking deal available with the ASX at the moment, so being at The Snow Centre enabled us to get across the affordability of the car. It was a really good way of talking to people who otherwise wouldn’t have walked into the showroom.

‘We were delighted to be asked to be involved. It’s tremendously exciting to have played a part in such an important sporting initiative.’

The stunning ASX crossover is available with a choice of powerful yet efficient petrol and diesel engines, and it had a refined diesel engine introduced this July. The ASX offers impressive fuel economy but still packs plenty of pulling power. It also boasts a five-star Euro-NCAP safety rating and is available as a four-wheel drive.

There were just 50 places available at the Snow Centre event, designed to identify up-and-coming British skiers and snowboarders across all disciplines, and Zoe, along with Cross Snowsports and Dan Brier, the performance manager for the British National Ski & Snowboard Cross teams, were there to offer professional coaching.

She and her team were looking for talented adaptive athletes, and GB Adaptive SBX coach Simon Nicholson was also present to search for hidden talent.

Zoe said: ‘I’m really pleased to be running this event together with Mitsubishi Motors. Mitsubishi have been a great supporter over this last season, and going towards the next Winter Olympics in PyeongChang in 2018, Mitsubishi will be playing a pivotal role in identifying and supporting young British athletes.’

Stewart McKee, General Manager of Press, Public Affairs and Events at Mitsubishi Motors UK, added: ‘We are delighted to be supporting Zoe in this way. What she has achieved is truly remarkable and perfectly encapsulates Mitsubishi’s ASX “Adventure Advanced” message, seeing amazing, young individuals taking on wintersport challenges.’

For more details, go to www.Mitsubishisport.co.uk