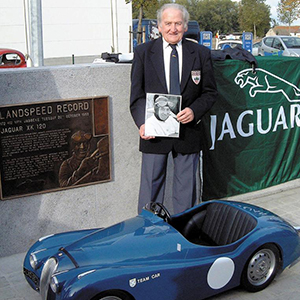 Norman Dewis, OBE, chief test driver and development engineer for Jaguar Cars from 1952 to 1985, is set to become the oldest ever contestant when he drives in this year’s MPG Marathon – at the tender age of 95!

Dewis, who was born in 1920, will be entering this year’s event, rated as the UK’s most prestigious lean-driving challenge, in a rear wheel drive, 2.0 litre 163hp Jaguar XE alongside Jaguar Heritage communications officer, Tony O’Keeffe.

Over the years, Dewis has played a major role in the development of some of Jaguar’s most iconic models, including the E-Type, XJ6, XJ-S and many more. He was behind the wheel of a Jaguar XK120 in October 1953 when it reached 172.412mph at Jabbeke, Belgium, a record for production cars.

Awarded the OBE for services to the motor industry in the New Year’s Honours List at the start of the year, Dewis is still attending events related to Jaguar and giving talks about his work for the company.

Astonishingly, his entry follows hard on the heels of the event’s two youngest ever entrants, Eloise Peabody-Rolf and Rory Carmichael, both 17. Both are members of The Under 17 Car Club, a national road safety charity which teaches young people to drive to a high standard before they are allowed out on a public highway, and have been driving since the age of 11.

In this year’s Marathon, which takes place on Tuesday 29th and Wednesday 30th of September, over a two-day 300-mile route across the Oxfordshire/Wiltshire countryside, they will be competing in a Honda Civic 1.6 i-DTEC with fuel consumption, on the combined cycle, of 78.5mpg and CO2 emissions of 94g/km.

And they will go head-to-head with their driving instructors, Paul Clifton, the BBC’s transport correspondent for southern England, and former police inspector, Shaun Cronin who was responsible for the roads policing team in Dorset. They will be driving a Honda CR-V with exactly the same engine as their pupils.

Event organiser and Fleet World publishing director, Jerry Ramsdale, commented: “We are delighted Norman Dewis has entered this year’s MPG Marathon as our oldest ever entrant. It will be great to see how such a driving legend, famed for his high speed driving exploits, copes with the demands of driving as frugally and as economically as possible in one today’s most modern cars.

“And his entry, just days after our two youngest-ever entrants, shows the really broad appeal that the event has. It promises to be a fascinating challenge this year.”

The new entrants will certainly face some stiff competition.  Reigning champions, Fergal McGrath and James Warren, have again entered the event where they are likely to go up against the previous year’s winners, Nick Chapman and Rosemary Horner, both employees of Leicestershire County Council.

This year, McGrath and Warren are again in a Honda Civic Tourer 1.6 i-DTEC, the model they won in last year, as they attempt to retain their hard-won title and, in doing so, become only the second pair of drivers to win the event two years in a row.

This year’s MPG Marathon, in its 15th year, is being sponsored for the first time by Barclaycard Fuel+ in association with TMC, and sets off from the stunning Heythrop Park Hotel and the Heythrop Park Resort near Enstone in Oxfordshire.

Car makers entering include BMW, Caterham, Ford, Peugeot, Renault, Citroen, Honda, Mazda, Kia and Jaguar, who have confirmed they will be entering their very latest models for the event.

Other drivers include Ben Wilson, this year’s ‘Patrol of the Year’ from sponsor, RAC,  who will be participating in the Mercedes Vito van that he uses every day in the course of his patrol duties.

He will be supported by colleagues from the RAC refuelling patrol team who will be on-hand around the course to ensure participants keep on the move and are operating within the rules of the challenge.

This year’s MPG Marathon, which is also being co-sponsored by ALD Automotive and TRACKER, allows competitors to find the most efficient route between set checkpoints for themselves, taking into consideration possible congestion hotspots, such as town centres.

Electric and hybrid vehicle classes will again be included, and they will be joining the more familiar diesel and petrol engined cars and vans that traditionally take part in the event.

There are eight main classes of passenger cars, restricted to a maximum carbon ceiling of 190g/km, including hybrid, range-extender and fully electric vehicles, plus five main classes of vans up to 3,500kg gross vehicle weight.

For more details of the MPG Marathon please phone 01727 739160, email [email protected] or visit the event website at http://www.thempgmarathon.co.uk/