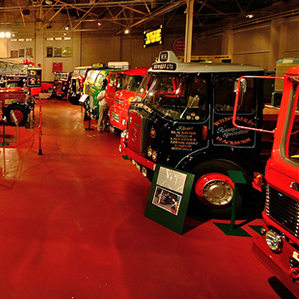 As a Leyland based publisher, FleetPoint are proud of the heritage and legacy that our humble neck of the woods has contributed to the British motor industry.

With this in mind, we thought we would take advantage of our unique place in the UK and look back at parts of that legacy with a couple of features on Leyland and its standing in automobile history.

As such, the team at FleetPoint thought a natural first stop would be a visit to the British Commercial Vehicle Museum. Based in Leyland, Lancashire, the museum is dedicated to preserving the history of the road transport industry in the UK and for added authenticity it’s even based in an original inspection building of Leyland Motors!

Completely volunteer run, my guide for the majority of my tour was Jeff, who had previously worked for Leyland Motors. Based across one floor of the disused factory, it goes without say that this is one of Britains most important heritage collections – a unique display of historic commercial vehicles and buses spanning a century of truck and bus building – from Rudolph Diesel’s earliest engine to the latest hybrids. The exhibits and archives contain not just examples of the vehicles themselves, but evidence of their interaction with a century of daily life, and one of the most impressive aspects was that the majority were still in working condition. Oh, and you can even sit in the cabs if the inspiration takes you.

The museum contains around 70 vehicles from several manufacturers and sketches a story of energy and innovation over the decades – starting with the horse drawn cart and steam power before moving on to petrol, diesel and early examples of todays green hybrid vehicles.

The crown jewel of the museum, or at least the most amusing aspect of it, was the inclusion of the Leyland Pope-mobile which was made especially for Saint John Paul II trip around England in 1982. Local truck manufacturer Leyland Trucks proudly built this and donated it to the museum.

It’s nice to pay tribute to the foundations of an industry that I now write about, and the museum is well worth a visit if you’re interested in the history of British fleet transport. There is enough here, with the help of a guide, to keep you interested and informed throughout the tour.

If you are interested in visiting, please be aware of the varying opening times. Due to being volunteer run it is only usually open on the weekend