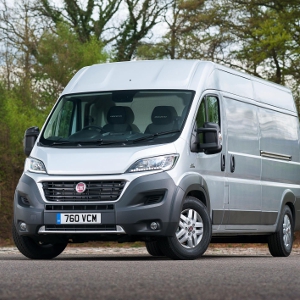 FIAT Professional has been named “Van Fleet Manufacturer of the Year” for the second consecutive year in the 2015 Commercial Fleet Awards, one of four major awards won by FIAT Professional at a gala event held at The International Centre in Telford last night.

Competing vehicles are compared across a number of vital fleet criteria, including payload and versatility; safety and technology; fuel efficiency and emissions; reliability and dealer back-up; comfort and performance and, of course, overall running costs. The judges deemed the FIAT Professional range the best in the UK not only in terms of the range and quality of the products it offers, but also in terms of its green credentials with improved eco:Drive Professional and eco:Drive Fleet software, new EcoJet low-emission derivatives, superior fuel efficiency across the range and improved longevity and recyclability with every new product.

Commenting on FIAT Professional’s Green Fleet Manufacturer of the Year Award, the judges noted: “FIAT Professional has a wide range of low emission vehicles, including viable petrol options on some models. It offers a holistic approach to the environment which encompasses its production techniques, van recyclability, stop-start technology and dashboard software which monitors driving behaviour.”  The judges also noted enhancements to eco:Drive which enables a fleet to enter parameters such as load weight to analyse its impact on fuel efficiency and emissions.

The significant haul of awards reflects the efforts being made by FIAT Professional to not only constantly improve its product line-up in a way which benefits its customers in the real world, it also recognises the ongoing strides the brand is making in terms of the range and quality of services it offers to every type of fleet customer in the UK.

In awarding FIAT Professional the “Van Fleet Manufacturer of the Year” award, the Commercial Fleet judging panel noted: “FIAT Professional listens to fleets and reacts with a level of realism which resonates with fleet operators. They do what they say and they have the authority to act quickly. Combined with reliable, efficient, low cost vans, FIAT Professional deservedly retains the manufacturer crown it won last year.”

Ricky McFarland, Country Manager FIAT Professional UK, commented: “We are delighted that our tireless efforts to continuously improve the support and service we provide to our fleet customers hasn’t gone unnoticed by the Commercial Fleet judges. This hard work, combined with our ever-improving model range, was key to retaining the prestigious title of Commercial Fleet “Van Fleet Manufacturer of the Year” for the second consecutive year, as well as scooping three other important awards and a commendation from the judges. With three new models due in 2016, we are already working on building on this success for next year!”

The annual Commercial Fleet Awards, now in its eighth year (previously the Fleet Van Awards), recognise the accomplishments of vehicle manufacturers, fleet operators and suppliers and are highly coveted by the light commercial vehicle industry. The judging panel includes members of the Fleet News/ Commercial Fleet editorial team as well as an independent team of van experts.