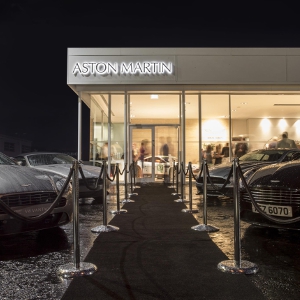 Aston Martin Belfast’s new facility opened its doors last night as customers enjoyed a celebratory reception to mark the occasion and were treated to an exclusive display.

The dealership, which continues to be operated by long-term partner Charles Hurst, benefits from a £1m development and signals the group’s commitment to the luxury British brand.

Opened officially by Marcus Blake, Aston Martin Regional Director, UK, the new dealership benefits from a luxurious new and pre-owned showroom, dedicated aftersales team and a workshop staffed by world-class Gaydon-trained technicians. As a result, both current and future Aston Martin customers from Northern Ireland and Ireland can continue to expect the highest levels of customer service.

Attendees were also treated to a private viewing of the new Aston Martin DB10 which will be seen in the upcoming James Bond film Spectre. Also included in the display was Aston Martin Racing endurance veteran, the #97 V8 Vantage GTE, and models from the company’s current line-up, spearheaded by the DB9 GT.

The site, which is situated on Boucher Road, Belfast, adds to the group’s impressive dealer network and is now fully operational for customers throughout the region.

Marcus Blake, Regional Director, UK & South Africa said, “I’m proud to have been here to officially open Aston Martin Belfast’s new facility. Charles Hurst is a fantastic partner and we thoroughly look forward to welcoming new and current customers to their Belfast location in the near future.”

Michael Gimson, Senior Sales Executive, Charles Hurst Group also commented, “We’ve been overwhelmed by the reaction of our guests this evening. The investment that we’ve made into this new dealership symbolises the strength of the relationship between ourselves and Aston Martin and we were incredibly honoured to showcase the Aston Martin DB10 as part of tonight’s display.”