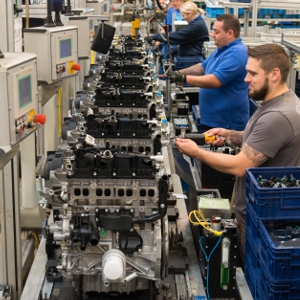 Ford has approved an investment of £181 million at its Bridgend Engine Plant in South Wales to produce a family of all-new, technologically-advanced, fuel-efficient petrol engines.

The investment includes Welsh Government support of £14.67 million, with production planned to start in late 2018.

The Ford announcement was welcomed by Welsh Economy Minister Edwina Hart: “Ford is a Welsh Anchor Company and the Bridgend Engine Plant plays a key role in the economy of South Wales. In a climate of stiff global competitiveness, we have been actively seeking to win a share of this investment for Wales and so we are delighted with today’s announcement.

“Ford’s decision to manufacture its new innovative engine here in Wales is a tribute to the reputation of the local management team and the quality and loyalty of the Welsh workforce and will safeguard more than 750 skilled Welsh jobs for many years.”

Earlier this year, Ford built its 5 millionth vehicle worldwide equipped with a fuel-efficient EcoBoost petrol engine, and in Europe more than one-in-four of all Ford vehicles sold are fitted with an EcoBoost engine. The 1.0-litre EcoBoost engine – winner of the International Engine of the Year for an unprecedented three years in succession – is the most popular EcoBoost version in Europe, with one-in-five vehicles sold in the region being equipped with the engine.