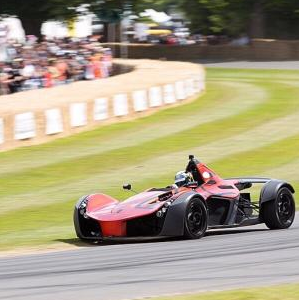 BAC introduced the 2016 Model Year Mono to the world at this year’s Goodwood Festival of Speed, with an unofficial road car record-breaking run on the famous hillclimb. With a series of runs comfortably sub 50-seconds, and a fastest time of 47.9, the Mono is able to compete with many dedicated racing cars.

The blistering runs capped off a successful Festival of Speed for BAC, where they met countless enthusiasts on the manufacturer lawn and entertained current and potential customers at the BAC bespoke customer experience zone, featuring several cars, a cutaway chassis, technical exhibits and an owners’ lounge.

With BAC test driver Oliver Webb at the wheel, the Goodwood hillclimb time was set in BAC’s 2016 Model Year Mono, featuring an all-new 2.5-litre Mountune four-cylinder engine producing 305bhp – that’s up 25bhp on the previous 2.3-litre Cosworth engine. The revised car weighs in at just 580kg giving an incredible 526bhp per tonne. The new 2016 Model Year Mono also includes a drive-by-wire throttle as well as a bespoke driver fitment culminating in a custom steering wheel and seat tailor-made for the owner.

What makes the hill time all the more impressive is the fact it was set while Oliver was not attempting a record as he was driving a car fitted with a pre-production prototype engine.

The success at Goodwood reflects a wider momentum within the BAC brand, with a new dedicated factory for design and build based in Liverpool giving a capacity for producing one car per month in current specification. With the factory located next door to Liverpool Airport, and the support of the city behind it, BAC can also uniquely claim to be the only car manufacturer that has the rights to use a working regional airport on which to test and shakedown customer cars.

BAC work to a coherent strategy and this has enabled them to focus on cutting-edge product development and commercialisation via key export markets in the US, South America, Japan and Asia. As the company grows rapidly, it is developing partnerships with complementary luxury companies, and BAC becoming increasingly known as a unique British brand in the top tier of the global luxury market.

Oliver Webb commented, “It’s always a privilege to drive at Goodwood and particularly to be entrusted to give the 2016 Model Year Mono its world debut in the ‘First Glance Class’. As Goodwood regulars will know, this class is not timed but our onboard telemetry showed that all of our runs were comfortably sub 50-seconds. Our time would have been faster than the quickest time set in this year’s supercar shoot out and would have even beaten the fastest road car time ever recorded on the hillclimb, by the mighty Nissan GT-R Nismo Time Attack.  Clearly our times were unofficial, but I would love to come back next year and challenge for the record officially, on new tyres and with our latest-spec Mountune engine. “

Speaking after the successful weekend at Goodwood, Andrew Whitney, Director of Strategy and Corporate Development said, “It was a fantastically successful weekend for us, and not just with our speed on the legendary hill. The customer experience zone was permanently busy and we were overwhelmed with serious interest, resulting in orders being taken well into double figures.

“It’s a very exciting time for the company, with new investment, a new factory and with our entry into new global markets. While we continue to update the Mono, the purity and clarity of the original design created by company founders Ian and Neill Briggs remains. As awareness of the BAC brand builds around the world, we are finding that the Mono’s unique concept and our best of British brand values are attracting interest from famous names from the international luxury market and we are excited to raise the profile of the Mono even further.”