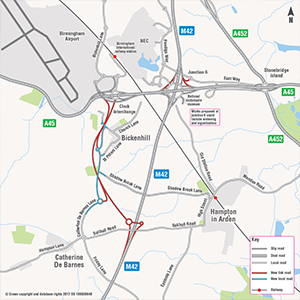 Highways England is announcing its preferred route for a major £282m improvement scheme to improve the M42 junction 6 near Solihull ­– which has the backing of local residents, businesses and road users.

Following a seven week consultation on three options which ended in January, Highways England is taking forward a modified version of Option 1 as the preferred route for M42 junction 6.

The modification moves the route slightly closer to the south west corner of Bickenhill to avoid a local business in the area and reduce the effect on the Bickenhill Meadows, a Site of Special Scientific Interest (SSSI).

Option 1 was supported by 64% of people who responded to the consultation, including 60% of the local residents. The preferred route will see a new 2.4km dual carriageway link road – aligned to the west of Bickenhill – between the A45 Clock Interchange and a new junction on the M42 south of junction 6  located north of Solihull Road.

Highways England regional director, Catherine Brookes, said: “M42 junction 6 lies at the heart of an area of dynamic growth and is surrounded by a unique mix of existing and proposed major assets that serve both the local and wider economy.”

Highways England senior project manager, Jonathan Pizzey, said: “The recent consultation was a great way to ensure that we heard the opinions of local residents and businesses in the area and also for them to have a say in the project as it moves forward.

“This is a vital scheme which will support economic growth in the area and beyond. It will also improve access to HS2, the National Exhibition Centre (NEC), Birmingham Airport and future developments such as the UK Central development area.”

The decision to take forward Option 1 has also received the backing of Birmingham International Airport and the UK Urban Growth Company.

Birmingham Airport chief operating officer, David Winstanley, said: “We welcome Highways England’s decision to progress the Option 1 scheme for improvements to junction 6 of the M42. This junction is a critical part of the road network which provides access to many of the region’s biggest employers but is currently heavily congested.

“It is therefore vital that better access is provided to ease current congestion and cater for the future growth of both Birmingham Airport and the surrounding UK Central area. We will continue to work with Highways England to ensure that our emerging master plan aligns with the scheme so that passengers using Birmingham Airport in years to come benefit from the improvements.”

Managing director at UK Urban Growth Company (UGC), Huw Rhys Lewis, said:  “We have worked closely with Highways England and wholeheartedly support this option which will increase the resilience and reliability of the road network in this area and in turn support economic growth.”

As part of the scheme there are also plans to improve traffic flow at the roundabout – a well-known bottleneck – by providing dedicated left turn links between the M42 and A45 at the NEC and the north east side of the roundabout. This will benefit motorists by reducing congestion and improving journey times around the junction, as well as access to and from the motorway.

Additionally, Highways England will be undertaking improvements to the M42 junction 6 roundabout, Clock Interchange and the A45 between the two junctions, in order to ensure the two junctions can work together going forward and minimise the effect on the A45.

Highways England will continue to work closely with all the stakeholders through the detailed design and statutory process to ensure their views and ideas are incorporated into the design where appropriate.

Following this work, Highways England will hold a further public consultation so that people can have their say on the detail of the project. It is expected that this will take place in late 2017 or early 2018.

Construction is expected to start in 2020 and completion is due in 2023.