This accolade secures him a place at the European Final of the event, which takes place at the home of Scania in Södertälje, Sweden over the weekend of 25-27 April. Should Chris succeed at that event, he will be presented with the keys to a brand new Scania R-series truck valued at 100,000 Euros.

Organised by Scania and supported by Michelin, Young European Truck Driver is the world’s largest road safety and driving skills competition. The event has been designed to promote and encourage the highest standards of road-craft.

In finishing first, Chris Brooker-Carey fought off challenges from seven other contenders, who had been shortlisted following a challenging online theory test.

As the UK winner, Chris received a cheque for £500, a magnum of champagne, a Driver’s Goodie Bag courtesy of Michelin, and a place at the European Final where he will pit his skills against contestants from 20 other European nations.

Immediately after collecting the winner’s trophy Chris said: “I’m speechless, excited and very determined – I’ll do everything I can to ensure I give it my best shot. I’m looking forward to the European Final immensely, in fact I can’t wait to get on the plane to Sweden!”

“I am delighted for Chris and congratulate him wholeheartedly on his win,” comments Claes Jacobsson, Managing Director of Scania (Great Britain) Limited. “Young European Truck Driver is a fantastic event which showcases the abilities of all contestants and underlines the importance of drivers and their road safety skills.” 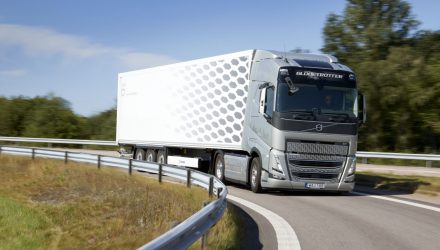 Record year for Volvo Trucks in 2022

The first charging corridor for medium and heavy-duty electric

Manheim Auction Services is celebrating after a record-braking year