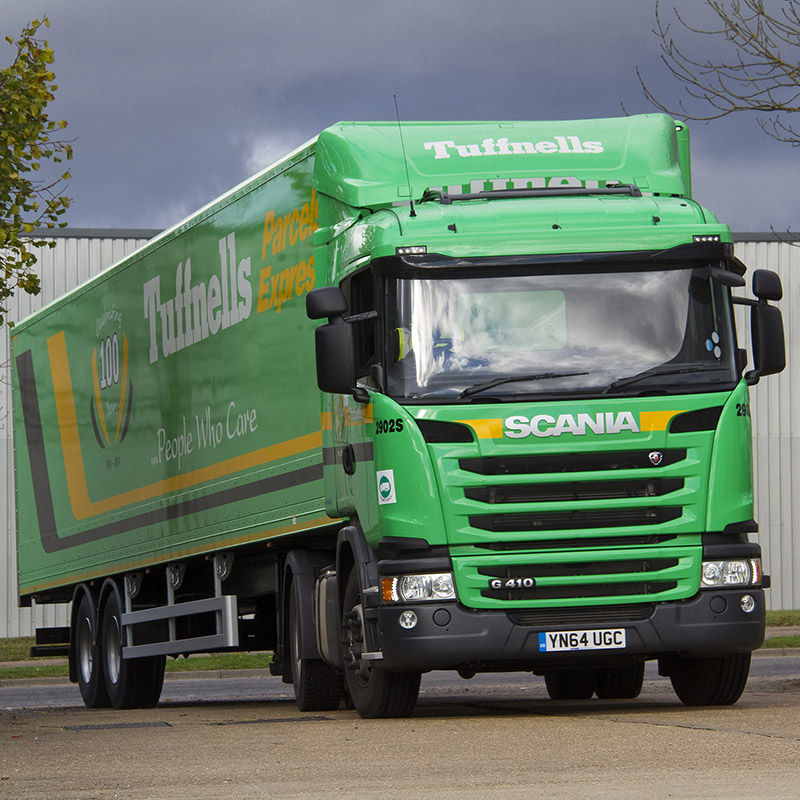 Part of the new fleet

“In common with many other operators, we had heard scare stories about the fuel efficiency of Euro 6 vehicles compared to Euro 5 so we decided to explore for ourselves whether the rumours were fact or fiction,” says Tuffnells Parcels Express Operations Director Graham Hollingdrake. “With our heavy trucks averaging 190,000 kilometres a year, fuel consumption is obviously a critical success factor for us. It was therefore essential that we evaluated the products on the marketplace before committing to ensure we made the correct purchasing decision.”

The fuel trial was organised and managed by Tuffnells Parcels Express National Fleet Manager Andrew Morton. “A total of five manufacturers were invited to supply vehicles for a month-long comparative fuel trial,” he reports. “Over the course of the event, the vehicles were run repeatedly over a number of our regular routes in order to produce results which could be meaningfully compared to one another.

“In addition to the fuel returns, we also reviewed the total package on offer from each manufacturer. Having operated Scania vehicles for the past four years we know the truck to be reliable and dependable, and that service is always close at hand whenever we need it. We monitor all downtime extremely closely as this can have a significant effect on our trunking operations. Experience tells us that the uptime of our Scania fleet is exceptionally high – hence our decision to opt for the marque once again.”

Tuffnells Parcels Express operates 34 depots around the country. The new Scania fleet will be based at a number of these, with all maintenance undertaken at each depot’s local Scania dealer. The firm operates a national fleet of 962 large and light commercial vehicles and employs a total of 2,300 at its locations around the country. Among these employees are 719 day drivers and 204 night drivers.

fuelGenie has expanded its petrol station network significantly with