A new ‘Dutch-style’ roundabout, designed to improve safety for vulnerable road users, has opened in Cambridge. 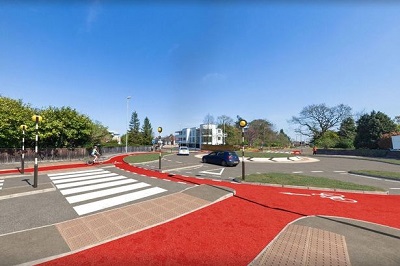 The roundabout, labelled a UK first by Cambridgeshire County Council, has an outer ring for cyclists, in a contrasting red surface, to give them priority over oncoming vehicles.

Drivers must give way to bicycles when entering and exiting the roundabout at the red cycle lane.

Parallel crossings have been installed on each of the four ‘arms’ of the ‘Dutch-style’ roundabout – these are zebra crossings for pedestrians and cycle crossings for cyclists.

The zebra crossings also extend over the cycle lanes, so pedestrians have priority over cyclists as well as motor vehicles.

The roundabout has also been designed to encourage motorists to drive at a slower speed, with a central over-run area allowing larger vehicles to manoeuvre around the roundabout.

Cambridgeshire County Council says slower speeds will help protect other road users on the roundabout, alongside the requirement for motorists to give way to cyclists and pedestrians on the crossings.

Cllr Ian Bates, chairman of the highways and transport committee, said: “I am delighted to see the completion of improvements to this roundabout, which aim to improve safety at this busy junction and encourage more people to walk and cycle.

“It is great to see Cambridgeshire leading the way in implementing the first truly Dutch inspired roundabout that improves safety for vulnerable users, ahead of recent nationally published Government guidance that strongly promotes this type of infrastructure.”

Improvements to the roundabout follow public consultations which highlighted that the old roundabout was perceived by many people to be dangerous to cycle around.

Residents also reported feeling unsafe when walking in the area due to a lack of pedestrian crossings, particularly more vulnerable users.