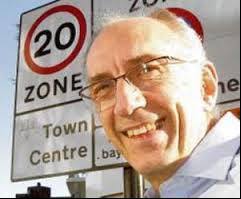 Rod King MBE, founder of 20’s Plenty for Us

The introduction of 20mph speed limits across Bristol has been a ‘massive success’, according to the campaign group 20’s Plenty for Us.

The roll-out of 20mph limits across Bristol was carried out in six phases between January 2014 and September 2015. Along with reducing traffic casualties, the scheme was introduced to improve health and wellbeing across the city.

20’s Plenty for Us says a review into its future, published by Bristol City Council in May 2019, shows ‘huge public support’.

The post implementation survey, which received 3,391 responses, suggests there is 95% support for 20mph limits by schools in the city. In addition, 74% of respondents backed 20mph limits on residential roads and 44% on main roads.

“While the policy was already proven to be cost effective, the review confirms 20mph as popular and people friendly. As Bristol’s strapline says – it’s a little bit slower and a whole lot better.

“20’s Plenty congratulates Bristol on its success, especially on collecting evidence for other places, like Wales, which has agreed 20mph default, to follow. We hope Bristol’s experience will inform the vote in Scotland this June.”

A study published by the University of the West of England in February 2018 concluded the introduction of 20mph speed limits across Bristol resulted in a 2.7mph fall in average traffic speeds – a ‘larger reduction than seen in previous evaluations in other cities’.

The study also found that the scheme led to a reduction in the number of fatal (4.5pa), serious (11.3pa) and slight injuries (159.3pa) from road traffic collisions – equating to an estimated financial saving of more than £15m per year.