The Mercedes-Benz F 015 Luxury in Motion 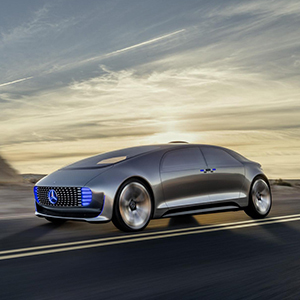 Merc unveil the car of the future…

Mercedes-Benz have already made the vision of autonomous driving a reality with their S 500 INTELLIGENT DRIVE and the Future Truck 2025 concepts, but the company have raised the bar with their latest research vehicle.

Premiered at the Consumer Electronics Show, the F 015, dubbed by the boffins as ‘Luxury in Motion’, provides an intriguing glimpse of the visionary ideas being developed around autonomous driving. Theoretically you’ll still be able to drive it yourself but reading between the lines of Dieter Zetsche’s announcement, the subtext is basically why on earth would you want to drive?

“The car is growing beyond its role as a mere means of transport and will ultimately become a mobile living space,” Dr Zetsche informed the crowd.

As such, Merc have gone above and beyond to make the interior comfortable with a plethora of home and office essentials, perhaps leading to them being labeled as slave wagons by a paranoid workforce who will expect work to factor your journey time into the working week. Of course, this is 15 theoretical years away and we’re all still waiting for hoverskateboards from Back To The Future II etc etc. The interior is dominated by variable seating, allowing occupants to rotate their rather comfortable looking lounge chairs 360* in the event that they might want to have an actual conversation with other passengers or recreate scenes from James Bond (fluffy white cat optional).

The cabin is also framed by six display screens, which use proximity sensors and gesture controls designed to distract away from scenes of congestion and shield you from the bumper-to-bumper chaos outside. It also provides virtual landscape displays to hide away the hundredth Greggs you may have passed on your journey. Merc obviously have their eye on continued population growth and congestion so are providing a spectacular antidote to commuter drudgery.

And if, shockhorror, you do decide to drive this driverless vehicle, you’ll be pleased to know that the F 015 is powered by Mercedes’ hydrogen fuel cell tech – this produces 272bhp overall with a range of 682 miles, achieving 0-60mph time of 6.7 seconds, topping out at 124mph top speed. But the announcement certainly downplayed this aspect of the experience… and to be fair, I can’t think of anything better then setting a course and having a snooze in the car when I’m a bit hungover.

With all this said, and as cool as it looks, the F 015 and other driverless innovations remain mired in some very big questions – who is responsible if an automated car crashes? Can a vehicle ever really make ethical choices if an accident is unavoidable? When will legislators create the necessary legal framework?

They’ve got 15 years to figure all this out, so time will tell…