Six new MERCEDES−EQ to be launched by 2022

Mercedes-Benz is targeting leadership in electric drives and vehicle software. The consistent electrification of the entire product portfolio is a key element of the strategic focus “Ambition 2039” and a prerequisite on the way to CO₂ neutrality. In 2022 the portfolio includes eight all-electric Mercedes-EQ models. The global Mercedes-Benz production network is ready for the company’s electric product offensive and is integrating its Mercedes-EQ models into series production in its existing plants. 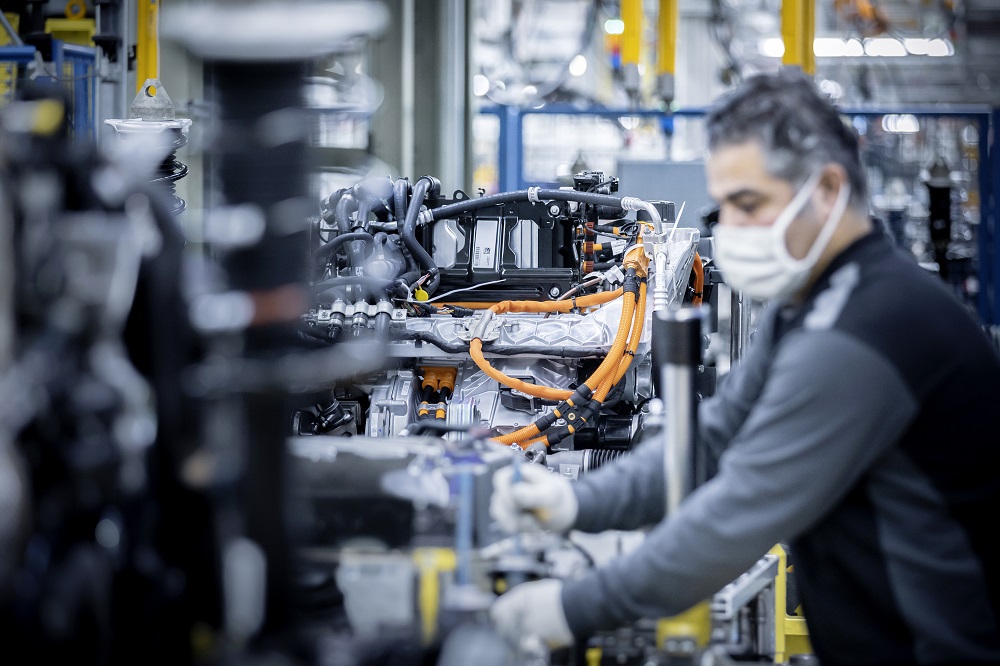 Markus Schäfer, Member of the Board of Management of Daimler AG and Mercedes-Benz AG; responsible for Daimler Group Research and COO Mercedes-Benz Cars: “With its ‘Electric First’ strategy, Mercedes-Benz is consistently on the path to CO₂ neutrality and is investing heavily in transformation. Our vehicle portfolio becomes electric and thus also our global production network with vehicle and battery factories. We intend to lead in the field of e-mobility and focus in particular on battery technology. We are taking a comprehensive approach, ranging from research and development to production, and also including strategic cooperation.”

The EQS, the first electric luxury sedan from Mercedes-Benz, will start in the first half of 2021 in Factory 56 at the Sindelfingen site (Germany). With the production launch of the electric compact SUV EQA at the Rastatt plant (Germany) and the current decision to locate EQB production in the Hungarian plant in Kecskemét, the company is taking further important steps toward making its product portfolio CO₂ neutral. The course has also been set toward “Electric First” in the global powertrain production network as well. High-efficiency battery systems will also be manufactured and assembled within the production network.

Jörg Burzer, Member of the Board of Management of Mercedes-Benz AG, Production and Supply Chain: “The Mercedes-Benz production network is global, digital and flexible, and ready for the upcoming electric offensive – thanks, of course, to our highly qualified and motivated employees worldwide. We are now beginning a real Mercedes-EQ fireworks display. Six electric product launches by 2022 underscore the strength and competence of our Mercedes-Benz production sites worldwide. The production network will have a total of six Mercedes-EQ car locations. Local production of highly efficient battery systems plays a central role in the Mercedes-Benz strategy – coupled with a comprehensive sustainability concept that spans the entire life cycle of the battery all the way to recycling.” 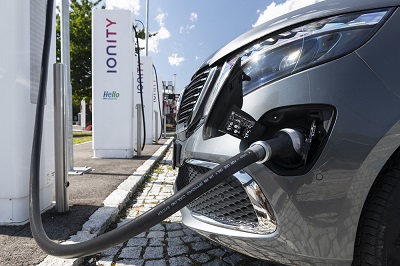 EQB production will launch in 2021 at two locations in the global Mercedes-Benz Cars production network: in the Hungarian Mercedes-Benz plant in Kecskemét for the world market and in the German-Chinese joint venture BBAC in Beijing for the local market. Plant preparation, including employee training and renovation work, is already underway. The compact SUV EQB will be the first purely electrically powered production vehicle from Hungary and will complement the plug-in hybrid portfolio consisting of the CLA and CLA Shooting Brake. The A-Class will also be produced in Kecskemét with a plug-in hybrid drive, in addition to production in the German Mercedes-Benz plant in Rastatt.

Furthermore, in the first half of 2021 production of the EQS electric luxury sedan will begin in Factory 56 at the Mercedes-Benz plant in Sindelfingen (Germany). EQS is the independent, fully electric member in the new S-Class program and is the first to use the new electric architecture for luxury and upper-class electric vehicles at Mercedes-Benz. In Factory 56 the S-Class and, in the future, the Mercedes-Maybach S-Class, and the EQS will be produced in a fully flexible manner on the same line. Factory 56 embodies the future of production at Mercedes-Benz and sets new standards for automobile construction. In Factory 56 efficiency gains of around 25 percent are achieved compared to the previous S-Class assembly. This is made possible by optimizing the entire value chain and full digitalization with MO360, the digital Mercedes-Benz production ecosystem. For further information on this: https://media.daimler.com/marsMediaSite/ko/en/47014243

Furthermore, the Mercedes-Benz plant in Bremen will begin production of the EQE business sedan in the second half of 2021, followed shortly thereafter at the Beijing plant. The EQE thus complements the all‑electric portfolio of the two plants. The Beijing plant will then produce a total of four Mercedes-EQ models for the local market.

The Mercedes-Benz plant in Tuscaloosa (USA) is also preparing for production of the EQE SUV and EQS SUV in 2022, which will be produced in the future on the same line with SUVs with conventional and plug-in hybrid drives.

In 2022 a total of eight Mercedes-EQ electric vehicles will be produced at seven locations on three continents. This is possible because the company made early investments worldwide in flexibility and technical equipment with future-oriented Industry 4.0 solutions. In the Mercedes-Benz AG plants, vehicles with different drive types can be produced in parallel thanks to highly flexible structures. With a view to the strategic goal of generating more than half of sales with so-called xEVs, i.e. plug-in hybrids and electric vehicles, from 2030 on and gradually increasing the purely electric share, the high degree of flexibility is a decisive advantage. It enables production to be adjusted at short notice depending on market demand.

Plug-in hybrid drive is important as a key technology and intermediate step toward a purely electric product portfolio. More than 20 plug-in hybrid model variants are already an integral part of the Mercedes-Benz product portfolio. The portfolio will be expanded to include more than 25 model variants by 2025. Their production therefore also plays an important role in the global production network. Plug-in hybrid vehicles are already rolling off Mercedes-Benz Cars assembly lines in almost all car plants. 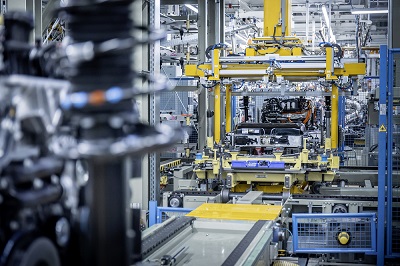 Two plants in Kamenz (Germany), have been producing battery systems for hybrids, plug-in hybrids and electric vehicles since 2012. The second battery factory at the site began operations in 2018 and has been producing the EQC’s battery systems since 2019. It was designed from the start as a CO₂ neutral plant and combines, among other things, solar energy, geothermal energy and a combined heat and power plant. The battery systems for the EQA have also recently rolled off the production line at the site. Since the start of production at Accumotive, more than a million batteries based on lithium-ion technology for electric, plug-in hybrid vehicles and 48-volt systems have been produced at the Kamenz site.

Mercedes-Benz and BAIC have jointly set up local battery production at the existing location in the Yizhuang Industrial Park in Beijing (China). This supplies the nearby vehicle plant, which has also added all-electric Mercedes-EQ models to its portfolio with the EQC. Production of battery systems for the EQC started there in 2019. With the start of production of the EQA, EQB and EQE, the plant will manufacture battery systems for a total of four Mercedes-Benz EQ models beginning in 2021.

This year the battery plant in Jawor (Poland) started producing plug-in hybrid batteries for the C, E and S‑Classes. In the coming year the location will expand its portfolio to include battery systems for the compact Mercedes-EQ models, the EQA and the EQB. Much like the battery plant in Kamenz, the plant was designed from the outset for CO₂ neutral production.

In the future at the Untertürkheim (Germany) site two plants will produce battery systems. Final preparations for the production of the battery systems for the EQS, which will roll off the production line in nearby Sindelfingen in the first half of 2021, are currently underway at the Hedelfingen plant. The battery system for the EQE will also be produced in Hedelfingen. Another battery plant is currently being built in the Brühl facility, which will manufacture battery systems for Mercedes-Benz plug-in hybrids starting 2022. The work on the building has already been completed. The battery plant in Brühl will be fitted with the corresponding equipment in the coming months.

Production of the EQS and EQE SUV models will start in 2022 at the Mercedes-Benz plant in Tuscaloosa (USA). A battery plant is currently being built in the immediate vicinity and will supply highly efficient battery systems for both models. Work on the building has already been completed. The ultra-modern systems will be installed in the coming months.

In addition, the Mercedes-Benz production strategy currently provides for another battery plant at the Sindelfingen site.

Together with local partner Thonburi Automotive Assembly Plant (TAAP), Mercedes-Benz Cars set up a battery production facility in Bangkok (Thailand) and began operations in 2019. Battery systems for the current C, E and S-Class plug-in hybrids are manufactured at the site. Preparations are also being made there to manufacture drive batteries for all-electric Mercedes-EQ brand vehicles.

1 Electricity consumption was determined on the basis of VO 692/2008/EG. Power consumption depends on vehicle configuration. The figures are provided in accordance with the German regulation ‘PKW-EnVKV’ and apply to the German market only. Further information on official fuel consumption figures and the official specific CO₂ emissions of new passenger cars can be found in the EU guide ‘Information on the fuel consumption, CO₂ emissions and energy consumption of new cars’, which is available free of charge at all sales dealerships, from DAT Deutsche Automobil Treuhand GmbH and at www.dat.de.