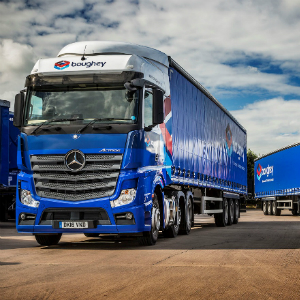 A comprehensive three-month trial of trucks by four manufacturers ended with a decision by Cheshire-based Boughey Distribution to replace its fleet of tractor units with 100 new Mercedes-Benz Actros.

The order went to Dealer Roanza Truck & Van, which has already supplied the first 25 trucks. All are Actros 2545 models with BigSpace cabs. Their 330 kW (449 hp) engines are from the second-generation 12.8-litre, six-cylinder OM471 range which features a raft of improvements designed to boost economy, including updated turbochargers and revised injection systems. They drive through smooth, efficient Mercedes PowerShift 3 automated transmissions.

The evaluation involved a fuel-efficiency comparison but, as Group Fleet Engineer Paul Brimelow affirmed, this was only part of the story.

“The most economical truck in the world is no good if the manufacturer’s network cannot support it,” he said. “So while the Actros returned the best fuel figures we had to be sure the back-up will be there when we need it too.

“Roanza and Mercedes-Benz displayed a highly professional and flexible approach, putting together a package that meets our needs perfectly. I have every faith they’ll keep our business moving.”

The initial fuel trial was carried out to exacting standards, with each manufacturer supplying a vehicle equipped with telematics, and a driver-trainer. The trucks were then sent out on a predetermined route from the operator’s headquarters near Nantwich, with four identical and equally-loaded trailers, first with the ‘expert’ at the wheel and a Boughey driver observing, and then with the roles reversed.

But the process did not end there. For the next 12 weeks the trucks were put to work, with the four drivers taking turns in each vehicle. Results were then compared, both between the four trucks and with the operator’s established fleet.

“The Actros delivered the best overall fuel performance, and by a margin,” recalled Mr Brimelow. “Not only was it the most economical of the contenders, but it was also the most consistent, with smaller variations between the different drivers. When we crunched the numbers it was a clear winner in terms of whole-life cost.

“We looked at other factors too,” he continued. “Our drivers had very good things to say about the Actros and the trucks certainly look smart in our livery, while the support package gives us everything we need.”

Boughey Distribution maintains its fleet in-house but Roanza has supplied training and diagnostic equipment for the operator’s technicians, as well as installing an imprest parts stock which is managed on site by one of its qualified partsmen.

“The Dealer has been very willing to work with us and we’re delighted with this arrangement, which will help to keep our workshop flowing smoothly,” added Mr Brimelow.

“The whole approach from Roanza has been very impressive – sales executive Dawn Wilson-Smith worked very hard to put this package together and the input from driver-trainers Chris Cooper and James Green is helping to deliver fuel returns which are still improving.”

Among the Boughey Distribution drivers to be handed the keys to a new Actros is Gareth Bell, who is also a prolific user of social media. Using the Twitter handle @RhosneigrGaz he has posted photographs of his Mercedes-Benz FleetBoard telematics results showing an average of over 12 mpg while running at 31 tonnes gcw, and 15.6 mpg empty. “I can honestly say I love this machine,” he tweeted. “Makes my working day a lot easier!”

Boughey Distribution has a diverse client base but has built a reputation for excellence in the ambient grocery sector, working for some of the UK’s largest retailers. It is also a member of the Palletline network. In addition to its tractor fleet, the company operates more than 200 trailers and 900,000 sq ft of warehousing.