New Eurocargo Fleet Becomes Part Of The Furniture At BOF 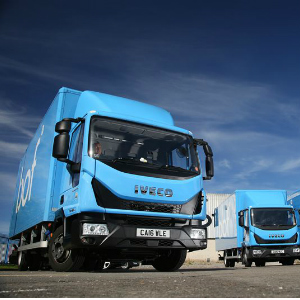 Long-time Iveco operator BOF has expanded its furniture delivery fleet with five 4×2 New Eurocargo rigid trucks, and describes its Iveco vehicles as the “ever-reliable workhorse” of its business.

The five new arrivals are all equipped with a 20ft rigid box body and roller shutter door, and will be in operation five days a week at the independent furniture provider, transporting the company’s goods for delivery of large projects, plus daily multi-drop missions nationwide.

BOF Operations Manager Neil Bowen says: “BOF has operated Iveco commercial vehicles for more than 10 years now, and we’ve come to view the company’s trucks and vans as the ever-reliable workhorse of our delivery operations.

“When the time came to expand the fleet, we were naturally drawn to the New Eurocargo, which has greatly expanded on its predecessor’s excellent pedigree as a delivery vehicle, making it the durable, flexible and economically sensible choice.”

Known as ‘The Truck the City Likes’, the New Eurocargo was designed from the ground-up to be both environmentally friendly and manoeuvrable in tight city streets, as well as quiet, fuel-efficient and comfortable for the driver – a real ‘mobile office’, and ideal for BOF’s intensive delivery schedule.

The New Eurocargo is the only Euro VI medium range vehicle to meet emissions standards with a single anti-emission system – Iveco’s HI-SCR technology, which utilises the passive regeneration of the diesel particulate filter.

This means vehicle productivity is increased, as Iveco’s HI-SCR system requires neither driver involvement nor downtime from active regeneration. Also, no fuel is utilised to burn particulates and no energy lost to cool down exhaust gases.

Independent furniture provider BOF creates inspiring environments for working and learning. The company works with clients across all major sectors, including some of the UK’s leading universities, councils and police forces.

The company has provided its services on notable projects, such as Swansea University’s Science and Innovation Bay Campus – the largest educational development of 2015 – plus major projects at the University of Cambridge, University of Warwick, University of Bath and University of Nottingham.