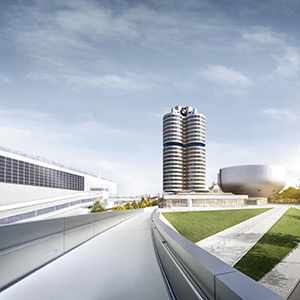 The BMW Group once again demonstrated its ability to generate sustained profitability in 2017, posting its eighth successive record year. Despite a significant increase in upfront expenditure for future mobility the company reported its best ever figures to date for sales volume, revenues and earnings. In addition, the BMW Group delivered more than 100,000 electrified vehicles to customers for the first time in a single year, firmly underpinning the Group’s role as a pioneer and key driver of electric mobility. In line with its Strategy NUMBER ONE > NEXT, the BMW Group continues to play a leading role in transforming the mobility sector with its future-oriented ACES programme: Automated, Connected, Electrified and Services.

“We can look back on the most successful year in our corporate history and have achieved record levels for revenues and earnings for the eighth year in succession,” stated Harald Krüger, Chairman of the Board of Management of BMW AG in Munich on Thursday. “Since 2016, we have taken numerous strategic decisions to further grow our business on a sustainable basis in the years ahead.”

Automotive sales volume increased by 4.1% to a new record level of 2,463,526 units in 2017 (2016: 2,367,603 units). With its three premium automotive brands, BMW, MINI and Rolls-Royce, the BMW Group asserted its position as the world’s leading manufacturer of premium vehicles. Deliveries of electrified vehicles jumped by 65.6% to 103,080 units, driven by the all-electric BMW i3 sales which have risen every year since the model’s market launch in 2013. The BMW Group intends to increase the sales volume of electrified vehicles to at least 140,000 units in 2018 and bring more than half a million electrified vehicles onto the roads by the end of 2019.

“In 2018, we expect the ratio to reach its highest level to date, with expenditure again rising by a further high three-digit million euro amount year-on-year. We need to earn these additional outlays by working with the utmost efficiency on the performance side while also maintaining a keen focus on the expenses side,” commented Peter.

“A company is only as good as its workforce. With their exemplary dedication, our employees are the driving force behind our success story,” stated Harald Krüger. “That is why, we pay our permanent staff in Germany the highest profit share in the sector.” At the Annual General Meeting on 17 May 2018, the Board of Management and the Supervisory Board will propose to shareholders that the dividend be increased to a new high of € 4.00 (2016: € 3.50) per share of common stock and € 4.02 (2016: € 3.52) per share of preferred stock. The distribution rate of 30.2% (2016: 33.3%) will be within the BMW Group’s target range of between 30 and 40%. “The proposal to raise the dividend by a significant amount is a clear sign of the BMW Group’s confidence that it is ideally placed to perform well in the future on a sustainable basis,” said Krüger.

In 2017, the Group again delivered over two million BMW brand vehicles to customers. Sales volume rose by 4.2% to 2,088,283 units year-on-year (2016: 2,003,359 units). The BMW X family remained a significant growth driver, with 9.6% more vehicles delivered to customers – an excellent performance considering the BMW X3 model change has been in progress since the second half of the year. Following the completion of the BMW 5 Series Sedan model change, December sales of the world’s leading premium business sedan were more than 55% up on the previous year, while sales volume for the year as a whole grew by 6.3% to 291,856 units. Other models contributing to growth in 2017 included the BMW 1 Series(201,968 units; +14.7%) and the brand’s flagship BMW 7 Series (64,311 units; +4.5%).

The MINI brand set a new sales volume record in 2017 with 371,881 deliveries worldwide and 3.2% year-on-year growth. Sales of the new MINI Countryman jumped by 30.0% (84,441 units). The MINI Convertible also made an important contribution to the brand’s successful performance, recording sales volume growth of 12.0% (33,317 units).

Rolls-Royce Motor Cars delivered 3,362 units (-16.2%) to customers in almost 50 countries around the globe. The figure was achieved despite volatility in key Middle East markets and the Phantom being unavailable throughout the year due to model change. The new Phantom was unveiled to the acclaim of an international public in London in July and has already received a large number of pre-orders. First customer deliveries commenced at the beginning of this year.

The BMW Group remains committed to its strategy of achieving a balanced distribution of sales worldwide.

Increase in workforce and number of apprentices

The size of the workforce grew by 4.2% in 2017. At 31 December, the BMW Group employed 129,932 people worldwide (2016: 124,729 employees). Projects relating to vehicle electrification and autonomous driving played a major role in the additional recruitment. Growth in automotive and motorcycle business on the one hand and the expansion of financial and mobility services on the other also contributed to the rise. The BMW Group continues to place great emphasis on its trainee programme and has again invested some € 350 million in basic and further training. Overall, more than 4,750 young people worldwide were employed in vocational training and training programmes for young talent at 31 December 2017.

With its highly attractive model range, the BMW Group expects worldwide deliveries of its vehicles to rise in 2018. The increasing availability of the new BMW X3 and the launch of appealing new products such as the BMW Z4 or the BMW 8 Series are likely to provide additional momentum. “This year we are targeting another new sales record, with deliveries slightly up on the previous year”, Krüger stated. At the same time, the BMW Group expects the political and economic environment to remain volatile.