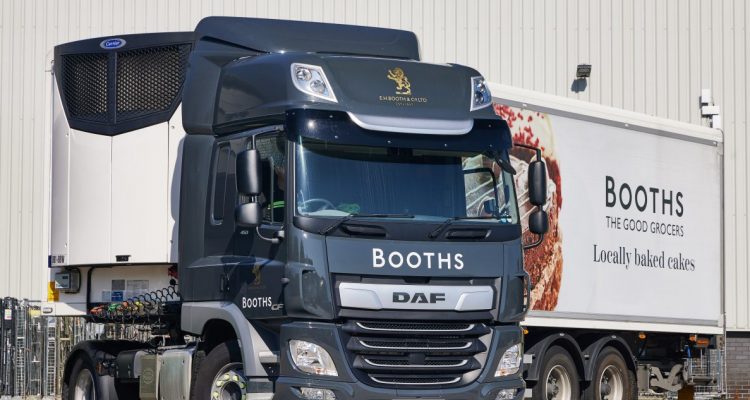 Booths chooses Carrier Transicold technology in move away from diesel

Later this year, two 26-tonne DAF CF rigids fitted with engineless Carrier Transicold ICELAND MT (multi-temperature) systems will also be added. The new assets will allow Booths to operate 70% of its temperature-controlled equipment on either all-electric or hybrid electric power. 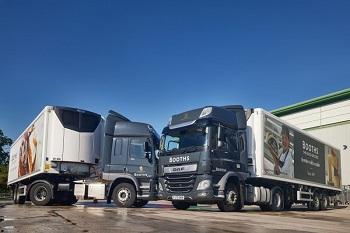 “We’ve been specifying Carrier systems for close to 10 years now and will soon be completely Carrier-cooled,” said Craig Stopforth, Transport Manager at Booths. “The reason being, they’re simply leading the industry in innovative, environmentally responsible technology that’s also commercially viable. Thanks to Carrier we can see a clear path toward an engineless future for our refrigeration systems and don’t anticipate specifying any diesel-powered systems from here on.”

Utilising the engineless version of Carrier Transicold’s Vector HE 19 MT refrigeration unit, the new Vector eCool system combines E-Drive™ all-electric technology with a new cutting-edge energy recovery and storage system. This converts kinetic energy generated by the trailer axle and brakes into electric power, which is stored in a battery pack that powers the refrigeration unit – a loop that creates the industry’s first fully autonomous system, producing no direct carbon dioxide (CO2) or particulate emissions. The system plays a key role in Carrier’s 2030 ESG goal of helping customers avoid more than one gigaton of greenhouse gas emissions.

The new assets will deliver chilled and frozen food products from the company’s main depot in Preston to stores across the northwest of England. The trailers will stay in the fleet for 10 years, while the company expects to keep the rigids in operation for approximately six years, with both expected to clock up close to 60,000 miles per year. Service and maintenance support for the Booths fleet, including the new assets, is provided by Carrier Transicold service partner, Carrier Northwest.

“The forward-thinking approach Booths takes toward the sustainability of its commercial vehicles is one that ties in very closely with Carrier Transicold’s own outlook,” said Geoff Fearnley-Hill, National Key Account Manager, Carrier Transicold UK. “Introducing Eco-Drive, the Vector eCool and Carrier’s engineless systems will play a key role in reducing refrigeration unit fuel costs while supporting Booths’ approach toward reducing emissions across its fleet.”

Booths has been in business since 1847, and now operates stores in towns and cities across Lancashire, Cheshire, Cumbria, and Yorkshire.