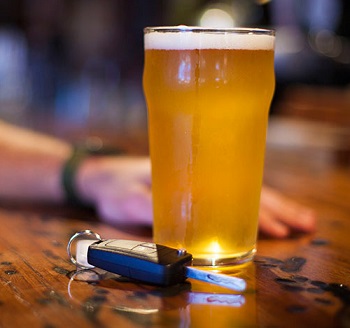 Earlier in the year, carwow sent out a range of ‘Freedom Of Information’ requests to each regional police force within the UK, in order to determine how many people had been arrested for driving under the influence of alcohol over the period of New Year’s Eve and New Year’s Day 2017/18 and 2018/19. The team also polled Brits in a bid to find out their attitudes towards drink driving and what they think of suggestions that anti-drink drive technology could be fitting in cars in the near-future.

When analysing each constituency’s results, Durham emerged as the area with the biggest percentage increase in DUI offences, with officers making 250% more arrests in 2018/19 than in the year previous. Below is a breakdown of the top five areas with the biggest YOY increase in New Years Eve drink-driving offences.

It was subsequently found the constituency of South Yorkshire witnessed the biggest decrease in New Year’s arrests for driving under the influence, highlighted below:

Alongside the Freedom of Information request analysis, carwow’s poll of 2,000 British people explored how the nation would like DUIs tackled.

Results found that one in five (20%) believe drink driving can be effectively policed through in-car technology, with 38% agreeing that all cars should be fitted with anti-drink driving technology as a legal requirement. Despite this, a wary 15% stated they think drivers would cheat anti-driving technology, deeming it ineffective, and only 17% would be willing to pay extra for the technology in their own car.

On a more positive note, just 6% of those questioned admitted they would ever be a passenger in a car with a driver under the influence of alcohol. 46% of Britons also felt that a zero-tolerance drink-drive limit of 10mg per 100ml of blood (i.e. no alcohol consumption at all before driving) should be introduced within the UK.

When quizzed on their own preferences for avoiding drink-drive offences, 56% felt a compulsory breathalyser before unlocking the car or starting the ignition would work as the best deterrent.

Finally, when asked which car manufacturer is likely to introduce technology primarily aimed at lessening DUI offences first, Tesla (16%), Mercedes (10%) and BMW (10%) proved as the most popular brands.

Vix Leyton, motoring expert at www.carwow.co.uk, commented: “As we edge towards the always hectic Christmas and New Year period, those burdened with the role of ‘designated driver’ may feel pressure from friends, family and colleagues to indulge in a tipple or two despite their motoring responsibilities. Driving under the influence of even a small amount of alcohol is inexcusable, with potentially life-threatening consequences for not only yourself but others. Similarly risking driving the next day after a heavy night can also be dangerous as your judgement and reaction times can still be impaired. While technology is in development to ground drivers who have had one too many, the most meaningful change that can be made immediately is encouraging responsible decision making before your car key is even in the lock.”