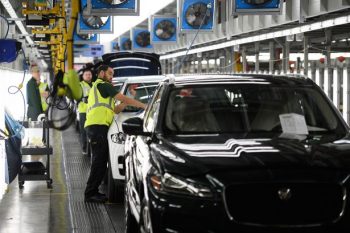 Jaguar Land Rover has announced that it will shut plants for an extra week between April 8th to April 12 as an addition to its scheduled week closure for maintenance from April 15th to April 23rd.

This extra week will be used to assess potential disruption from Brexit, due on the 29th March. This follows Honda’s announcement to shut for a week for similar reasons, and JLR’s closure of Solihull last October as a resuly of “fluctuating demand”, particularly from China.

This closure will affect the car plants in Castle Bromwich, Halewood and Solihull, and will also include the engine plant at Wolverhampton, and will affect just under 39,000 workers across those plants

The company has said: “… Jaguar Land Rover has confirmed this year’s holiday dates to employees across all UK sites. As part of this, we have also confirmed that there will be an additional week of production stand-down 8th – 12th April due to potential Brexit disruption.”

Business Secretary Greg Clark warned earlier this month that JLR’s problems would be dramatically worsened by a no-deal Brexit in March. He told Sky News: “A no-deal Brexit, a disorderly Brexit, would add extra costs, do extra damage, to the company just at the time when clearly they don’t need that.”

A closure plan was announced by JLR earlier this month in a bid to cut costs of up to £2.5bn