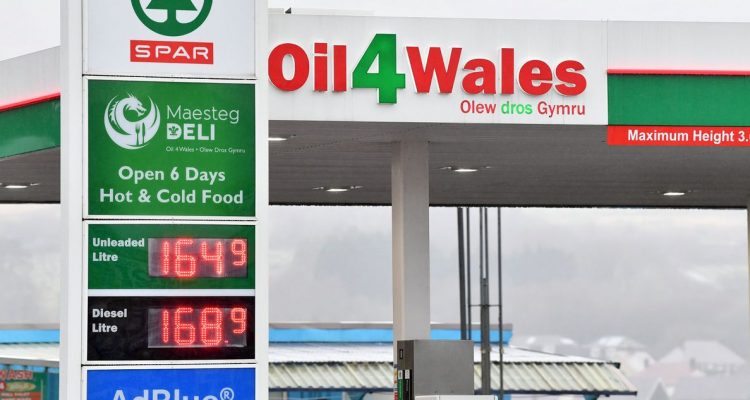 Record pump prices are hurting drivers and the economy

It is possible that petrol and diesel prices are to rocket even further by 10p to 20p per litre this coming week. Howard Cox of FairFuelUK takes a close look at the current fuel market and makes recommendation to the chancellor to address the unsustainable rise in fuel price in the Spring Statement on the 23rd March 2022.

The extra VAT generated in the last year and the coming months because of the record prices at the pumps is more than enough to give drivers some respite and cut Fuel Duty by 5p. This would bring pump prices in line with the average of Europe and make businesses more competitive and viable in a post Covid recovery phase.

Even considering exchange rate changes since 2014 when the dollar price for a barrel of Brent Oil was similar to current prices, diesel and petrol are 10p to 14p per litre HIGHER NOW than necessary. For the driver of the average family car that is an eye watering £7.70 more than is both honest and fair. 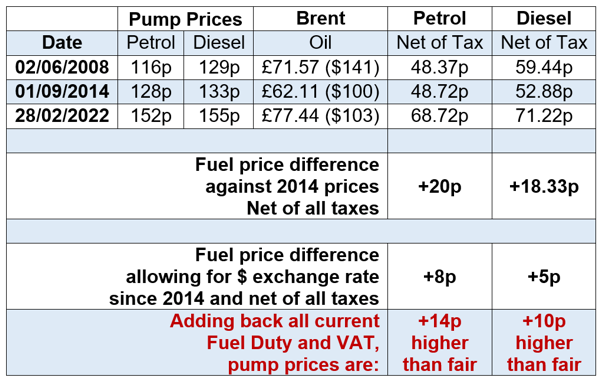 A fighting fit resilient road freight and logistics sector is essential too, not only to keep Britain moving, but to help build back better as we return to normality following the pandemic. Without your support through the introduction of an essential user rebate, we run the very real risk that as hauliers continue to be hit with sky high diesel prices during a cost-of-living crisis, the industry’s economic future will become ever more uncertain.

With over half of the cost of a litre of diesel accounted for by tax, we firmly believe that action should be taken to back UK hauliers and keep consumer prices under control through the introduction of an essential user rebate of 15p per litre. This step would mirror an approach taken by many other European nations including Spain, France and Italy which has proved successful.

For over a decade of campaigning, FairFuelUK has witnessed the insidious unchecked fleecing of UK drivers. Our nation’s commercial, community, social heartbeat and our right of travel choice have been so relentlessly demonised and ruthlessly exploited, it has become an institutionalised commercial and fiscal fixation to implement a tsunami of anti-driver policies. And it seems, there are more to come.

The exploitation of drivers is running even more rampant, with businesses shameless without any compunction using the Ukrainian Conflict to line their pockets.

In Drumchapel, Glasgow, a BP garage has just hiked diesel from 159.9p to 173.9p per litre. What is the basis for that increase and why yet again are diesel drivers being exploited more than petrol users?

There has to be transparency in the way petrol and diesel prices are reached as ‘global market commodity costs and exchange rates ‘legitimately’ fluctuate.

Why is the Treasury, and they know full well, not acting to check uncontrolled profiteering is damaging the economy, hitting the already highest taxed drivers in the world, and fuelling inflation?

Surely the lack of any monetary help for drivers, is not down to the £2bn gargantuan pile of extra VAT the Treasury has relished due to a fortunate high cost of filling up.

If gas, electricity, water and telecoms get price protection bodies, why shouldn’t motorists have one too? We need ‘PumpWatch’ now, to ensure pricing fairness for both consumers and hardworking fuel retailers too. Most of the profiteering is at wholesale level not by small independent retailers, who are also victims of the greedy fuel supply chain.

Olly Jones, Co-founder of elmo: “The increase in petrol and diesel prices continues to be a concern for motorists up and down the country. With £1.55 for petrol and £1.61 for diesel reported over the weekend, it’s worrying times for many, especially given the rise in cost of living too.

While battery electric vehicles (BEVs) are considered by many as the future of consumer transport, a large segment of UK motorists are still not prepared to make the switch, citing barriers including lack of charging infrastructure and high upfront costs.

Will rising fuel prices convince these “ICE” vehicle drivers to make the switch to electric?

Time will tell, but with energy price increases affecting both home and public charging costs, it’s not a completely clear-cut decision. That said, with motorists increasingly conscious of the ban on new ICE sales, low emission zone charges coming into force in cities across the country (like Oxford in February) and a growing general concern for the effects of climate change, we expect this latest surge in fuel costs to help move prospective EV drivers further towards a tipping point.”