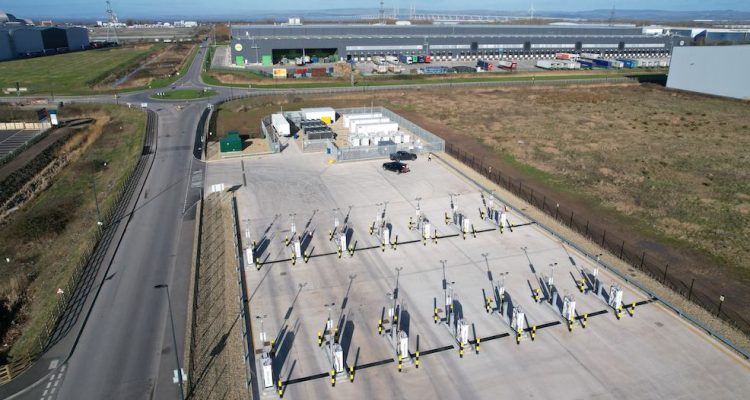 CNG Fuels, the UK’s leading provider of renewable biomethane for HGVs, today announces the opening of the world’s largest public access biomethane refuelling station in Avonmouth, near Bristol. The site will meet the growing demand from major brands to cut emissions from haulage and save money, while also supporting the decarbonisation of the UK’s road haulage sector, responsible for 18% of total UK road transport emissions.

Located in the heart of Avonmouth, near the M4/M5 junction just outside Bristol, the site is capable of refuelling 80 HGVs per hour from 14 high-speed dispensers, making it the largest public access biomethane refuelling station in the world. When fully utilised, the station will cut 70,000 tonnes of greenhouse gas emissions per year by taking diesel HGVs off the road. The site is part of CNG Fuels’ nationwide network of eight renewable biomethane refuelling stations which covers the length and breadth of the country, enabling low carbon deliveries from Inverness all the way down to Cornwall. The company is aiming to build 12 additional stations each year to cater for growing demand.

Demand for renewable biomethane has increased by 1,000% over the last five years as brands across the country urgently seek to cut haulage emissions in line with the UK’s net zero strategy. The demand is predicted to increase five-fold over the next five years as the UK’s 2040 ban on the sale of new diesel HGVs approaches.

The new station is closely situated to existing customers, such as Royal Mail, Warburtons and Amazon, helping major household brands to slash haulage emissions and align with the UK’s net zero targets. Lidl supermarket is the latest brand to convert its fleets to renewable biomethane. 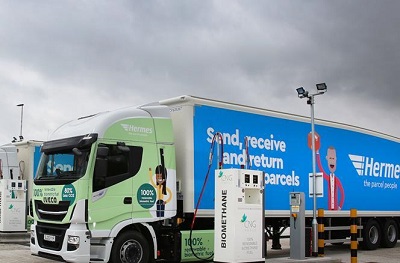 Jason Wild, Distribution and Recycling Consultant of Lidl, said: “We are committed to reducing our environmental impact across our entire operations and switching our fleets over to renewable biomethane instead of diesel is a crucial step. CNG Fuels’ new station in Avonmouth is a key location to allow us to make low-carbon deliveries across the Southwest.”

John Dinham, Owner of John Dinham Transport, said: “Running our fleets on 100% renewable biomethane is a win-win for our business and for our customers. It has been a huge selling point for us, especially amongst our bigger corporate customers who have pledged to reduce their carbon footprint. We are committed to significantly reducing emissions from our fleets and renewable biomethane is the perfect solution to enable us to do so now.

“We have more biomethane trucks on order and the new site in Avonmouth puts the world’s largest biomethane refuelling station on our doorstep, making it easier than ever to refuel our fleet with Bio-CNG. As our fuel supplier, CNG Fuels’ service is second to none, they have made us feel very comfortable about investing in bio-CNG technology.”

100% of the fuel supplied by CNG Fuels is renewable and sustainable biomethane, sourced from food waste and approved under the Department for Transport’s Renewable Transport Fuel Obligation (RTFO) scheme. Renewable biomethane is the lowest carbon and most cost-effective alternative to diesel for HGVs, cutting greenhouse gas emissions by up to 90% and reducing lifetime vehicle costs by 30%-40%.

Philip Fjeld, CEO of CNG Fuels, said: “Brands across the country are under more and more pressure to cut emissions from fleets and renewable biomethane is the only commercially viable solution on the market today. We are continuing to see high increases in demand and with the recent news of the 2040 ban on new diesel HGV’s, we expect the pace of demand to continue.

“We are rapidly expanding our nationwide network of refuelling stations, ensuring sites are strategically located across major trucking routes to make them as accessible as possible. The new site in Avonmouth is in a key location for many of our customers, allowing them to expand the reach of their low carbon deliveries into the South West and Wales.  In addition to our expanding network, we are also preparing for a multiple fuel future to ensure that when new technologies emerge, the infrastructure will already be in place to cater to demand.”

The site joins eight existing refuelling stations already operated by CNG Fuels, with most of the country already within a 300-mile range of a CNG Fuels refuelling station. By 2023, the company will have 20 large public access stations in operation to meet the exponential growth in demand.

Last year the company announced plans to host hydrogen fuel trials across its expanding UK-wide network to ensure stations are already to support a multi-fuel future as different technologies develop and become commercially viable. The first hydrogen trails are due to begin this year and by 2025, CNG Fuels plans to allocate 100 acres of its land to public access hydrogen refuelling.