Up to 4,000 people will soon be able to take advantage of training courses to become HGV drivers, as part of a package of measures announced today by the Government to ease temporary supply chain pressures in food haulage industries, brought on by the pandemic and the global economy rebounding around the world. 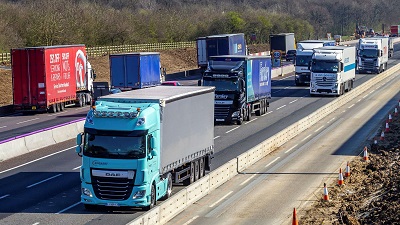 The Department for Education is investing up to £10m to create new Skills Bootcamps to train up to 3,000 more people to become HGV drivers. The free, short, intensive courses will train drivers to be road ready and gain a Cat C or Cat C&E license, helping to tackle the current HGV driver shortage. An additional 1,000 people are expected to be trained through courses accessed locally and funded by the government’s adult education budget.

Fuel tanker drivers need additional safety qualifications, which the Government will work with industry to ensure drivers can access as quickly as possible.

To help make sure new drivers can be road ready as quickly as possible, the Department for Transport (DfT) have also agreed to work with Driver and Vehicles Standards Agency (DVSA) to ensure that tests will be available for participants who have completed training courses as soon as possible.

The Ministry of Defence (MoD) is also announcing today the immediate deployment of their Defence Driving Examiners (DDEs) to increase the country’s testing capacity. MOD examiners will work alongside DVSA examiners, providing thousands of extra tests over the next 12 weeks.

The package comes as the DfT, along with leading logistics organisations have worked with the DVLA to send nearly 1 million letters to thank HGV drivers for their vital role supporting our economy, and to encourage those who have left the industry to return. The letter, which will arrive on doormats over the coming days, sets out that the steps the road haulage sector is taking to improve the industry, including increased wages, flexible working and fixed hours.

Alongside this, 5,000 HGV fuel tanker and food lorry drivers will be able to come to the UK for three months in the run-up to Christmas, providing short-term relief for the haulage industry. A further 5,500 visas for poultry workers will also be made available for the same short period, to avoid any potential further pressures on the food industry during this exceptional period.

Recruitment for additional short-term HGV drivers and poultry workers will begin in October and these visas will be valid until 24 December 2021. UK Visas and Immigration (UKVI) are preparing to process the required visa applications, once made, in a timely manner.

However, we want to see employers make long term investments in the UK domestic workforce instead of relying on labour to build a high-wage, high-skill economy.

Visas will not be the long term solution, and reform within the industry is vital. That’s why the Government continues to support the industry in solving this issue through improved testing and hiring, with better pay, working conditions and diversity.

Transport Secretary Grant Shapps said: “This package of measures builds on the important work we have already done to ease this global crisis in the UK, and this Government continues to do everything we can to help the haulage and food industries contend with the HGV driver shortage.

“We are acting now but the industries must also play their part with working conditions continuing to improve and the deserved salary increases continuing to be maintained in order for companies to retain new drivers.

“After a very difficult 18 months, I know how important this Christmas is for all of us and that’s why we’re taking these steps at the earliest opportunity to ensure preparations remain on track.”

Separately, the Government is also bringing in legislation to allow delegated driving examiners at the three emergency services and the MoD to be able to conduct driving tests for one another. This will give the emergency services greater flexibility and help increase the number of tests DVSA examiners can provide HGV examiners.

The government will also provide funding for both medical and HGV licenses for any adult who completes an HGV driving qualification accessed through the Adult Education Budget in academic year 2021/22. Previously, adults who took these qualifications had to pay for their own licenses. This change will be backdated and applied to anyone who started one of these qualifications on or after August 1st 2021.

Education Secretary Nadhim Zahawi said: “HGV drivers keep this country running. We are taking action to tackle the shortage of drivers by removing barriers to help more people to launch new well-paid careers in the industry, supporting thousands to get the training they need to be road ready.

“As we build back from the pandemic we’re committed to supporting people, no matter their background, to get the skills and training they need to get good jobs at any stage of their lives, while creating the talent pipeline businesses need for the future.”

Environment Secretary George Eustice said: “It is a top priority to ensure that there are enough workers across the country’s supply chains to make sure they remain strong and resilient.

“We have listened to concerns from the sector and we are acting to alleviate what is a very tight labour market.”

The Government has been able to bring forward these solutions in response to a global issue  made worse by coronavirus thanks to our existing   work in this area. We have already taken a range of steps to support the industry, including streamlining the process for new HGV drivers and increasing the number of driving tests. Our measures provided a rapid increase in capacity and allow for an extra 50,000 tests to take place per year.

Progress has already been made in testing and hiring, with improving pay, working conditions and diversity. We continue to closely monitor labour supply and work with sector leaders to understand how we can best ease particular pinch points. Through our Plan for Jobs we’re helping people across the UK retrain, build new skills and get back into work.

“This is something UK food and drink manufacturers have asked for over the last few months – including in industry’s Grant Thornton report – to alleviate some of the pressure labour shortages have placed on the food supply chain.

“This is a start but we need the Government to continue to collaborate with industry and seek additional long term solutions.”

Elizabeth de Jong, Logistics UK’s Director of Policy, said: “Logistics UK welcomes the Government package of measures aimed at improving the ongoing driver crisis. The government’s decision to grant 5,000 temporary visas for HGV drivers to help in the short term is a huge step forward; we are so pleased the government has listened to our calls and has made this bold decision to support the UK economy.

“We are also delighted that DfT have agreed to jointly send nearly 1 million letters to all drivers who currently hold an HGV driving licence. With fantastic HGV driving opportunities available in the logistics industry, now is the perfect time to consider returning to the occupation.”