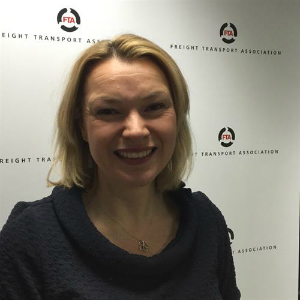 Over 79% of ladies are keen to get behind the wheel of a lorry, and there is a rise in younger women wanting to take up driving – according to FTA figures revealed today.

A Twitter poll carried out by the Freight Transport Association, asked ladies if they were willing to drive a 44-tonne truck as less than one per cent of truckers are currently female.  Seventy-nine per cent of respondents voted ‘yes.’  As a result FTA now says it is important to explore why more women aren’t coming into the industry.

Around 2,200 of the 315,000 registered truck drivers in the UK are female, but recent statistics show that the gender balance, and younger women wanting to enter the profession is improving with 15 per cent aged between 21 and 25.

Sally Gilson, (Pictured) FTA Skills Policy Development Manager says: “These figures are encouraging as it is essential that more women are recruited – currently only one per cent of HGV drivers in the UK are female.

“We believe that one of the biggest barriers for would-be truck drivers is the cost of gaining a licence and training – around £3,000.  FTA has been calling on Government to provide a suitable loan system.  The current Personal Career Development Loan option is not appropriate and a simple change to allow Level 2 qualifications to be included within the 19+ loan would provide the quickest and best solution.”

Solving the current shortfall of over 45,000 HGV drivers is a major campaign for the Association, an issue recently recognised in a Transport Select Committee report which quoted FTA evidence reflecting difficulties logistics operators face in recruiting drivers.

The FTA Logistics Report 2016 shows that more than 64% of truck drivers are over 45 – the average age has steadily increased over the past 15 years – and problems with filling vacancies are high on our members’ list of priorities. This has been compounded in recent years by the consequence of economic growth and the huge rise in e-commerce. Lack of funding for vocational training for drivers means fewer are joining the industry and there is a real risk that the shortage of HGV drivers could severely impact the economy.

Let us know in the comments if you’ve noticed a rise in women in the industry, or if you are a female truck driver, let us know how you got into it and the benefits you bring.