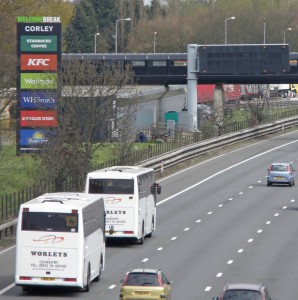 Under the plans, the maximum price for a car’s MOT test will be frozen at £54.85 until 2015, while independent panels will target ‘whiplash cheats’.

The medical panels – to be introduced next year – will only take evidence from accredited professionals and ensure bona fide claimants get the help they require.

Meanwhile, new fuel comparison road signs will be trialled on motorways, showing prices at different service stations along a route.

Mr Grayling said: “We are turning the tide on the compensation culture and helping hardworking people by tackling high insurance premiums and other motoring costs.

“It’s not right that people who cheat the insurance system get away with it while forcing up the price for everyone else – so we are now going after ‘whiplash fraudsters’ and will keep on driving premiums down.”

According to new AA statistics, average motor insurance premiums have fallen by more than 12% over the past year – equivalent to an £80 reduction on an average policy.

While the number of whiplash claims has fallen since 2011, the government claim they will continue to target the issue.

Whiplash claims cost insurers more than £2billion in payouts and lead to an average premium increase of £90 for drivers.

Each whiplash compensation payout costs an average of £2,400, claim insurers, with an additional £2,000 in legal costs.

Martin Milliner, Claims Director at LV=, claimed that while the medical panel proposals were agreeable, the government still should be doing more to deter bogus claims.

“The financial partnership between those who assess whiplash injuries or provide treatment for them and those who profit from pursuing claims has helped fuel the UK’s whiplash problem and it is time the government put an end to this unhealthy relationship.

“Fees for medical reports should be set at a capped and reduced rate, with tariffs forming part of the LASPO legislation, to prevent the cost of claims spiralling further.

“It is disappointing that the Ministry of Justice has gone back on its pledge to increase the limit for personal injury in the small claims track to a minimum of £5,000 as this would have deterred many of the more spurious claims that come through.

“The opportunity for the claims management industry to profit from such cases is what has driven up the volume of personal injury claims and created the compensation culture that exists today.

“Nothing in the government reforms so far has properly addressed this root cause.

“This is a missed opportunity and it would appear that the government has backed down on this issue.”

The Institute of Advanced Motorists (IAM) claimed they were most impressed with the government’s action on highly-priced service area fuel.

Neil Greig, Director of Policy at the IAM, said: “At last the government has recognised that high prices at motorway service areas are putting people off stopping.

“Comparison pricing is just a start and the IAM will be watching carefully to see of true competition does actually drive down prices.”