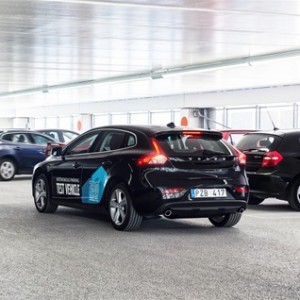 FUTURE: Driverless car that parks itself

Volvo are set to demonstrate a car which finds and parks in a vacant space by itself, without need for a driver.

Due for exhibition next week, the concept vehicle interacts safely and smoothly with other cars and pedestrians in the car park before reaching its destination.

The driver activates the autonomous parking using a mobile phone application, before walking away from the car and letting the vehicle do the rest.

Thomas Broberg, Senior Safety Advisor at Volvo Car Group, said: “Autonomous parking is a concept technology that relieves the driver of the time-consuming task of finding a vacant parking space.

“The driver just drops the vehicle off at the entrance to the car park and picks it up in the same place later.”

Vehicle 2 Infrastructure technology – transmitters in the road infrastructure – informs the driver when the service is available.

Using sensors to localise, the car navigates to a free parking space, with the procedure reversed when the driver comes back to pick up the car.

Combining autonomous driving with detection and auto brake for other objects makes it possible for the car to interact safely with other cars and pedestrians.

Speed and braking are adapted for smooth integration in the parking environment.

Volvo’s aim is to gain leadership in the field of autonomous driving by moving beyond concepts and deliver pioneering technologies that will reach the customers.

The autonomous parking concept is one of several development projects in this field.

Volvo was the only participating car manufacturer in the SARTRE (Safe Road Trains for the Environment) project, which was successfully completed in 2012.

The project involved seven European partners, focusing on technology that can be implemented on conventional highways on which platooned traffic operates in a mixed environment with other road users.

The SARTRE platoon included a lead truck followed by four Volvos driven autonomously at speeds of up to 90kmh – in some cases with no more than a four-metre gap between the vehicles.

“The autonomous parking and platooning technologies are still being developed,” added Mr Broberg.

“However, we will take the first steps towards our leadership aim by introducing the first features with autonomous steering in the all-new Volvo XC90, which will be revealed at the end of 2014.”