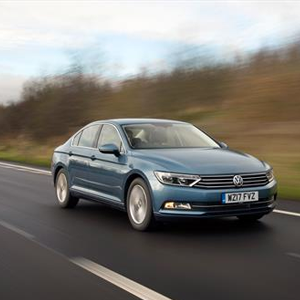 Four efficient petrol engines are now available to order for the first time from Volkswagen Retailers in the popular Passat Saloon and Estate, and Tiguan SUV, model ranges.

The comprehensive line-up of new petrol engines now being offered in Passat and Tiguan further broaden the cars’ appeal while also allowing the growing numbers of buyers keen to enjoy the benefits of petrol power to consider two of Volkswagen’s most popular models.

What’s more, for the first time the sporty R-Line trim is being made available with an entry-level engine in Passat. This broadens choice as well as making stylish R-Line ownership even more accessible – with the new 1.4-litre TSI 125 PS Passat R-Line a particularly attractive proposition for style- and budget-conscious buyers.

Hard-headed fleet and business users could be equally enamoured of the new petrol-powered Passats thanks to a strong set of benefit in kind (BIK) statistics.

The new petrol-powered Passat models – which exactly mirror the equipment specifications of their diesel siblings on a like-for-like trim basis – will sit alongside the existing diesel engines in the extensive Passat family, and will be introduced at an RRP roughly £1,900 below their diesel equivalents, making them a compelling alternative for many buyers.

Meanwhile, seven new petrol derivatives have also been added to the burgeoning Volkswagen Tiguan range. The 1.4-litre 125 PS TSI 2WD has been introduced on the SE and SE Nav trim lines, offering a lower entry price from just £25,000 RRP OTR into these desirable models.

The accomplished 1.4-litre 150 PS 2WD DSG is now available on the SEL and R-Line which, priced from £29,900 RRP OTR for the SEL trim, also creates a lower entry point into these luxurious and sporty models.