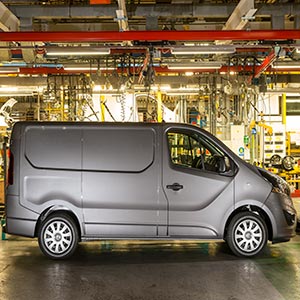 Vauxhall built over 60,000 vans in the UK last year, making it Britain’s number one van maker for the 14th year running, according to figures released today by the Society of Motor Manufacturers and Traders.

Driven by UK Vivaro sales of over 28,000, Vauxhall manufactured 60,280 vans at its plant in Luton, Bedfordshire.

The offer of four years’ zero per cent APR finance, four years’ free servicing, a four year warranty and four years’ AA cover, was particularly popular with retail customers where Vauxhall was number one in this segment.

“We are delighted to be the UK’s leading van manufacturer for the 14th year running,” said Rory Harvey, Vauxhall’s Chairman and Managing Director. “The Luton-built Vivaro is the lynchpin of our award-winning van range and we are very proud of our 113 year heritage of building vehicles in Britain.”

Vauxhall’s all-new Vivaro, launched in 2014, and secured 1,500 jobs at the UK’s only dedicated light commercial vehicle plant after workers won a ten-year contract and a £185 million investment.

Thanks to the outstanding attitude and work ethic of the workforce, the Luton plant beat world class competition from across Europe to build the new van.

Rival Ford shut its Transit factory in Southampton 2013 making Vauxhall’s Luton facility the sole flag bearer for UK van manufacturing, on a site where over eight million vehicles have been built since 1905. The factory is a major exporter with 52 per cent of production destined for European markets.

Supplier firms across the country also benefit from £600 million of business over the life cycle of the second-generation Vivaro with 40 per cent of content sourced locally from UK suppliers, up from 24 per cent for the previous van.