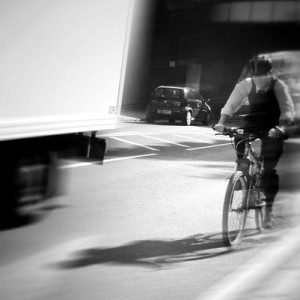 Banning HGVs during peak hours is not the answer to cutting the number of cycle deaths, the Freight Transport Association (FTA) have insisted.

Several politicians and cycling campaign groups have advocated the banning of lorries from London in the rush hour, citing Paris and Dublin as precedents.

The Association agree that more must be done, including by the logistics industry, to improve cycling safety, but claimed the mooted plans are ‘unachievable’.

They also added that the plans fail to recognise the role commercial vehicles play in supplying and servicing towns and cities.

Christopher Snelling, Head of Urban Logistics Policy at the FTA, said: “FTA believes that the idea of banning HGVs from a city like London in peak hours is naive and not commercially viable.

“It would mean massive economic implications for the shops, businesses and residents of the capital.

“It would also create new safety issues as one lorry is replaced by about eight cars – not to mention the increased congestion and air pollution that would result.”

The FTA have also discovered the Paris ban exempts nearly all trucks currently on London’s roads and the supposed Dublin ban is avoidable upon toll payment.

“Very few trucks of this size operate on London’s roads because there is already a long-standing ban on articulated vehicles in the central area.

“Paris also exempts a long list of vehicles, including all construction traffic – the vehicles that are most represented in recent cycling fatalities.

“The Dublin scheme is not a ban at all, as any vehicle of any size can move about and deliver or collect anything anywhere at any time, as long as they pay a €10 fee.

“It is too simplistic to cite Paris and Dublin as examples of where HGV bans work as in practice very few vehicles are denied access to the city centres that need to be there.

“The reality is that the city authorities recognise that goods deliveries are essential to the efficient functioning of the city and permit them round-the-clock access.”

Mr Snelling also insisted there are many deliveries that cannot be displaced until later in the morning – including those of fresh food, catering supplies, medical services and office supplies.

“One death is too many and we must all do more to improve safety – cyclists, public authorities, public transport and HGV drivers and operators included,” added Mr Snelling.

“But banning HGVs is a simplistic response with massive economic and transport impacts and an unquantified safety case.

“Any measures taken should be intelligent, targeted and evidence based if we are to improve safety whilst allowing our cities to function.”