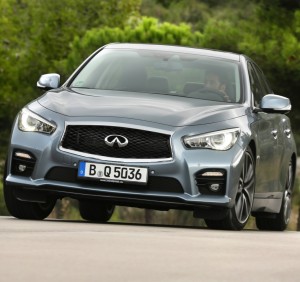 Infiniti are adding a new 2.0litre turbocharged petrol engine to their Q50 range, it has been revealed.

Launched at the Guangzhou Motor Show, the four-cylinder powertrain will go on sale next year and offer a power output of 211bhp.

It adds to the current Q50 options of a 3.7litre petrol, an award-winning 3.5litre hybrid and a 2.2litre, four cylinder turbo-diesel.

The new engine is the result of Infiniti’s collaboration agreement with Daimler AG.

As with the 2.2litre direct-injection four-cylinder turbo-diesel engine destined for Europe, the petrol version has been modified by the Infiniti engineering teams.