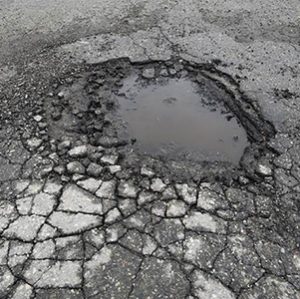 In 2016, a whopping 1,031,787 potholes were reported by drivers, new research from Confused.com has revealed.
Combined, the total number of potholes in the UK would reach a depth of 40km – almost four times deeper than the Pacific Ocean’s Mariana Trench (11,000m).

Councils fork out thousands on repairs

The figures were obtained from local authorities around the country, who were also asked the minimum depth of a road defect to be considered a pothole, and the size of their yearly repair bill.
In total, local authorities had to fork out £3.1m to compensate victims of pothole damage last year. Of any local authority, Wiltshire Council made the biggest payout to victims of pothole damage – over half a million pounds in total. And it’s not just the level of compensation which varies from place to place. The cost of repair is also something which seems to be more expensive in some areas more than others.

For example, Westminster City Council paid an average of £2,400 per pothole in 2016.

The UK’s pothole issue has not gone unnoticed by motorists. One in three has suffered damage to their vehicle as a result of poor road surfaces.
The damage was overwhelmingly caused to drivers’ tyres (64%) and their suspension (42%). And even though councils spent £104m on repairing potholes in 2016 – an average cost of £245 per pothole – 69% of drivers think they should do more to tackle the problem.

Amanda Stretton, motoring editor at Confused.com, says: “Scrolling to depths of 40km really puts the UK’s pothole problem into perspective. They’re a major bugbear among drivers, not least because of the damage they do to our vehicles – around £3.1m’s worth.”
Amanda says drivers should report pothole damage to their local council as soon as possible before the problem gets any worse.
“The cost of motoring alone is getting more and more expensive, and damage repair is a big contributor to this, as car parts increase in price as well,” adds Amanda.

The state of potholes for 2017 still needs to be assessed, but by all accounts, it is going to be even worse than 2016.