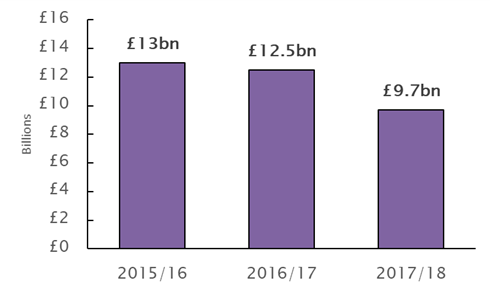 Net debt of UK car dealerships, adjusting for stock funded by manufacturers. Based on an analysis of latest full year, audited results

The UK’s Top 100 UK car dealerships have reduced their debts by 22% over the last year to £9.7bn down from £12.5bn in the previous year*, says UHY Hacker Young, the national accountancy firm.

UHY Hacker Young says the debt reduction has significantly improved the financial strength of the sector ahead of the expected Brexit related slowdown in car sales.

Paul Daly, Partner of UHY Hacker Young explains that since the Brexit vote in June 2016 UK dealerships have been gradually de-risking in the knowledge that big ticket purchases like car sales are the first to suffer when consumer confidence fails.

UHY Hacker Young says that car dealerships have managed to slash their debt by reducing capital investment, selling off property assets (through sale and leasebacks) and becoming more focused on cash generation. In some cases, non-core overseas assets have also been sold.

Paul Daly, Partner at UHY Hacker Young, says: “The cutting of debt among UK dealerships has put them in a much better, stronger position.”

“To date, dealership results have fared well despite the fall in new car sales owing to the strength of the used vehicle and aftersales markets.  However, preparing to weather any post Brexit storm through debt reduction seems a very sensible move by the sector.”

“Risk of a sales slump caused by a post Brexit knock to consumer confidence and the potential 10% tariffs on EU manufactured vehicles is fairly severe but lower gearing will certainly help to keep this manageable.”

Paul Daly says that the tough trading conditions that the automotive industry faces needs to be taken into account by the Government in areas such as emissions policy, tax incentives for hybrid and electric cars and in the regulation of finance to fund car sales.