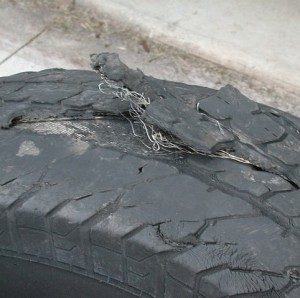 The message comes after an investigation by Bristol Trading Standards found 100% of inspected part-worn tyres purchased from retailers across the city were illegally sold.

In the inspection, funded by the National Tyre Distributors Association, officers discovered 10 out of 10 investigated tyres failed to meet relevant regulations.

Furthermore, tyres in the sample were also found to contain serious safety breaches and levels of neglect which could have resulted in their catastrophic failure.

A similar investigation by TyreSafe last year found 49 out of 50 (98%) part-worn tyres bought nationwide were being sold illegally, with one described as ‘having the potential to kill’.

“A very clear set of regulations exist to control the legal sale of used tyres but as we’ve seen time and time before, these are not being adhered to.

“As a result, drivers are taking a massive gamble with their lives if they decide to buy and fit these.”

While it is not illegal for used tyres to be sold by retailers, they must adhere to several regulations relating to condition before selling.

Requirements include undergoing a thorough inspection and pressure test, having at least 2mm of tread depth and being marked as part-worn.

Dean Gray, Trading Standards Investigator for Bristol City Council, said: “People can buy second-hand tyres without any problems but we have seen some horrific cases, including a tyre sold, as new but which was in fact sixteen years old and blew up on the motorway the day after.

“For the safety of consumers it is essential that the vendor follows legislation and checks for damage, illegal repairs and properly marks the tyre as part worn.

“A few simple checks could save someone’s life.”

The average cost per mm of useable tread for the part worn tyres was £6.33, whereas for comparable new tyres, the cost was just £5.32.

Mr Jackson added: “We commend Bristol Trading Standards in looking into this and would urge other councils to do similar as there is growing evidence that the sale of illegal part worn tyres is a widespread problem across the whole country.

“We understand that drivers continue to be squeezed by rising running costs, but when replacing your tyres, in our opinion, the safest and most economical option is to always fit brand new tyres.”

TyreSafe is a not-for-profit road safety organisation dedicated to raising awareness about the importance of correct tyre maintenance and the dangers of defective and worn tyres.

Image courtesy of subewi, with thanks.