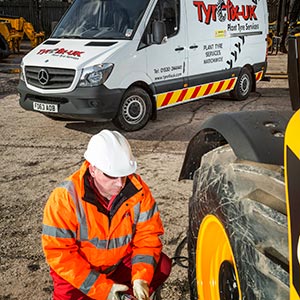 Specialist supplier Tyrefix UK have reverted to Mercedes-Benz mobile workshops after ‘a torrid year of problems’ with their previous vans.

A year ago, the Leicester-based plant tyre company abandoned their previous policy of buying Mercedes pre-owned vans, instead purchasing a fleet of new vehicles from another manufacturer.

However, Tyrefix have now embarked on a process of replacing their entire, 75-strong fleet with new Mercedes-Benz Sprinters.

City Dealer Mertrux have just delivered the first batch of six Medium-length Sprinter 313 CDIs, with the rest scheduled to arrive at a rate of three per month.

“We were offered a very cheap deal by another manufacturer so we took the plunge – then endured a torrid year, as up to seven vans a day broke down.”

Tony Etheridge, Operations Director at Tyrefix UK, said: “We previously bought second-hand Mercedes-Benz vans and ran them into the ground.

“They always served us well but we decided it was time to smarten up our image by moving to a fleet of new vehicles.

“We were offered a very cheap deal by another manufacturer so we took the plunge – then endured a torrid year, as up to seven vans a day broke down with a whole range of problems.

“What’s more, we couldn’t get warranty cover for more than 100,000miles, so now, as each one reaches that figure, we’re taking the opportunity to replace it with a new Mercedes-Benz.”