Be A Time Traveller At Beaulieu For May Half-Term 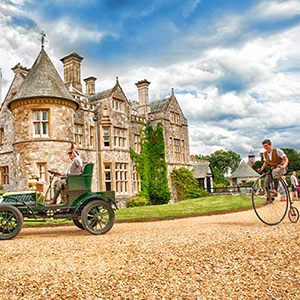 Become a Time Traveller at Beaulieu this May half-term with medieval archery and falconry, the newly opened Victorian kitchen at Palace House and futuristic car designs in the National Motor Museum.

Explore Beaulieu’s history spanning hundreds of years, from the ruins of the 13th century Beaulieu Abbey to modern-day motoring, with fun time-travelling activities for families across the attraction.

Step back to medieval pastimes and see magnificent birds of prey in flight with Beaulieu’s falconer in the Cloister and on the lawns of Palace House, the ancestral Montagu family home. The Beaulieu Bowmen will perform archery in the nave, while Brother William offers quill writing activities and photo opportunities to dress up as a monk following in the footsteps of monks who lived at the abbey.

Then travel through history to Victorian times in Palace House. Meet Lord Montagu’s cook in the newly restored Victorian kitchen as she bakes on the authentic, coal-fired range and prepares vegetables for his Lordship’s dinner. Then dress up in Victorian costumes and enjoy playing traditional games.

Follow the Time Traveller trail to find a car from every decade in the National Motor Museum, where you can also travel through motoring history in the Wheels pod ride. Pick up a sheet to design your own futuristic car and you might see it posted at the end of the ride’s timeline.

At the end of the trail, treat yourself to a free reward of a Time Traveller’s crazy cocktail at the Brab Lab in the Brabazon Restaurant.

All half-term activities are included in the standard Beaulieu admission ticket, which includes entrance to the National Motor Museum, World of Top Gear, On Screen Cars, Palace House, Beaulieu Abbey and the picturesque grounds and gardens.

For Spring Bank Holiday Monday on May 29th your admission ticket also includes entrance to The 999 Show as it celebrates the work of the emergency services. This exciting event includes a CSI murder mystery at Palace House, extrication rescue display, VIP kidnap demonstration, horses in the New Forest Agisters’ pound, dog skill displays, a speed trap featuring a penny farthing and a large collection of historic emergency services vehicles.