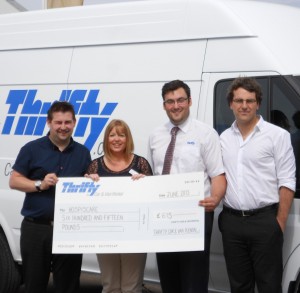 Employees at Thrifty Car and Van Rental are nursing sore chests after taking part in a fundraising wax for Devon-based charity Hospiscare.

Three members of staff – Simon Taylor, Callum Baker and Luke Wright – bared their chests to a local beautician to raise £615 for the Thrifty-supported charity.

In addition, the Exeter-based business donates £1 from each online booking made to charity.

This is divided between the company’s three chosen charities: Hospiscare, Cancer Research UK and Thrifty’s own Chairman’s Charity Fund.

Linda Malliff, Director of Central Services at Thrifty Car and Van Rental, said: “To be fundraising for such a worthy and local cause means a great deal to everyone at Thrifty.

“Through our fundraising and online donations, we hope to raise a significant amount of money this year for Hospiscare.”

John Arnold, Corporate Fundraiser at Hospiscare, added: “We are absolutely delighted to receive this cheque from Thrifty and would like to thank the intrepid three who agreed to this stunt for such a good local cause.

“Thrifty has been a fantastic corporate supporter of Hospiscare over the last few years and the funds donated, which represent a major contribution, are used directly for the care of our patients and their families in the local community.

“We would like to thank Thrifty for their continuing support which means so much to our patients, staff and volunteers.”

Thrifty Car and Van Rental operate nationwide and currently have 90 branches within the UK.

More than 20% of their UK fleet are commercial vehicles.