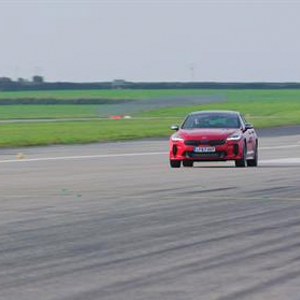 In a display of astonishing high speed to celebrate the official UK media launch of the new Kia Stinger, three ‘GT S’ models took to Newquay airport’s runway achieving speeds of over 150mph.

Perfectly demonstrating the power and mile munching prowess of the new Kia Stinger, three pro-drivers took to the once military air strip in a staggered ‘half duck V’ pattern, giving onlookers a jaw dropping view of the vehicles capability in a place not normally associated with cars.

Starting at the east end of Newquay airport’s 1.7 mile runway, the vehicles deployed full throttle until reaching the last quarter length of the tarmac when the vehicle’s 350mm ventilated Brembo discs brakes brought all three vehicles safely to a stop.

Powering the ‘GT S’ models to these great speeds was the vehicle’s twin-turbo 365bhp 3.3-litre V6 T-GDi engine, capable of taking the car from standstill to 60mph in only 4.7 seconds and on to a top speed of 168mph.

This week the whole Stinger range launches to UK media and goes on sale on January 1 2018.