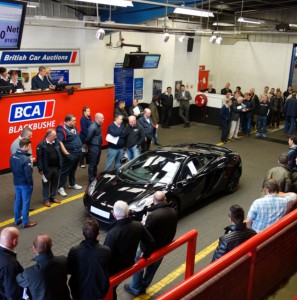 The supercar, sold at BCA Blackbushe on October 23, is one of the most powerful road-legal cars available, with a 0-60mph of 3.1seconds and a top speed of 207mph.

Carbon black, the auctioned vehicle had covered just 6,400miles from new and was offered with a recent service history and the correct documentation.

It has a 3.8litre V8, twin-turbo engine, developing around 616bhp, and driving technology – such as brake steer – sourced from Formula One.

Tim Naylor, of BCA, said: “The McLaren was the star of the show and generated a huge amount of interest from buyers not just in the UK but from Europe and further afield.

“However, this was a very strong result across a selection of high value vehicles and underlines that there is plenty of confidence from buyers to invest often considerable sums of money in these ‘top end’ vehicles.

“Bidding was very competitive throughout the sale.”