SEAT Reduces Energy And Water Consumption By 20% In Production Plants 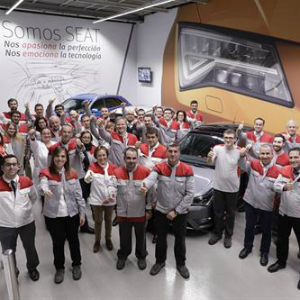 SEAT has managed to reduce energy consumption by 23.2% and water consumption by 24.5% in its production processes over the last five years. Both indicators are part of the ECOMOTIVE FACTORY strategy, which was launched in 2011, aimed at optimising resources and making the company’s three plants (Martorell, Barcelona and SEAT Componentes) increasingly more efficient and sustainable. SEAT is currently firmly on track to fulfilling the challenge of reducing the impact of the production processes on the environment by 25%, a goal that has been set for 2018.

Process efficiency and sustainability was one of the aspects that earned the company a special mention to quality at the Factory of the Year (Fabrik des Jahres) awards, one of the world’s most prestigious benchmarking competitions for manufacturing companies. It assesses factories in any business sector which stand out for productivity, quality, innovation, digitisation and economic sustainability, among other aspects, considering their performance over the past three years and their prospects for the next three years. The Martorell plant received one of the five special mentions that accompany the top award.

SEAT Vice-president for Production Dr. Andreas Tostmann expressed his satisfaction at the recognition: “Being rewarded by Factory of the Year is the best guarantee of the work carried out by the entire SEAT team and our commitment to improving our quality and productivity indicators, as well as environmental efficiency”.

The aspects that are assessed for the recognition are related to production as well as logistics, the quality of working conditions, supplier management and the environment, among others. The panel of judges highlighted the PQT strategy (Production, Quality, Team), an initiative which was launched in 2012 with the aim of improving productivity and the quality of SEAT’s production processes and respond to future challenges in the car industry.

In the framework of the PQT strategy, SEAT has implemented measures to reduce the use of energy resources, increase the levels of quality and improve productivity. In fact, in the last five years SEAT has stepped up its projects in the area of sustainability across all spheres of activity, including Production, R&D, Logistics and Sales, among others.

In addition to decreasing water and energy consumption by 24.5% and 23.2% respectively, concentrations of volatile organic compounds have decreased by 17.2%, waste has been reduced by 41.6% and CO2 emissions are 65.2% lower. With all these improvements, SEAT is nearing, a year earlier than expected, its goal of reducing the overall environmental impact of its production processes by 25% by 2018. “This demonstrates that SEAT’s production, quality and sustainability strategy is on track” added Tostmann.

The efforts made by SEAT to increase the efficiency and sustainability of its production processes are clearly visible in its improved productivity rates, as demonstrated by indicators such as manufacturing cost per vehicle, which from 2012 to 2015 went down by 10.6%, or the number of vehicles produced per worker, which in the last five years has gone up by 17.2%.