Seat Ateca Is Honest John’s Car Of The Year 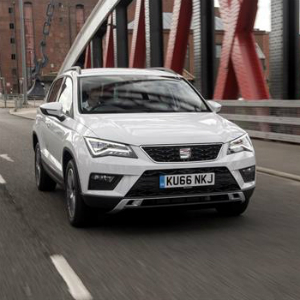 The SEAT Ateca has been named Honest John’s 2017 Car of the Year, a 10th major UK award for the stylish new crossover in just 10 months since its launch. As well as taking the overall honour, the Ateca was also named “best crossover” at their glitzy ceremony in London this evening.

Dan Powell, Honest John’s Managing Editor, said: “We had to wait a long time for SEAT’s first crossover, but the good-looking and affordable Ateca is proof that good things do indeed come to those who wait. Over the past 12 months, no other car has come close to matching the admiration of the Ateca, with our readers praising its style, comfort and running costs. As a result, the superb SEAT takes both the Car of the Year and most-popular crossover awards for 2017.”

Richard Harrison, SEAT UK Director, said: “This is a fantastic award to receive, not least because it’s based on real-world enthusiasm for Ateca, expressed by the huge numbers of people who use Honest John’s website. The Ateca is proving a huge hit for us in the UK, and in truth, we could hardly have scripted a better start for it, both in terms of its sales success and multi-award-winning first few months on sale.”

The Barcelona-designed and developed Ateca has already added significant impetus to SEAT’s soaring UK sales, helping push registrations to record levels already this year. Even more momentum’s expected from the first roll-out of new FR versions too, adding an authentic sporty dimension to the range. Ordering for the FR models opens on 3 July 2017, with a rich choice of engine options, plus, the availability of SEAT’s 4Drive all-wheel drive system.

Honest John operates one of the UK’s foremost consumer motoring websites, honestjohn.co.uk, and prides itself on championing fairness for car owners by publishing expert, unbiased information to help people make informed choices about their vehicles. The Honest John awards are based on the number of page views for each new car review during the year, crunching the numbers from around two million unique page visits every month.