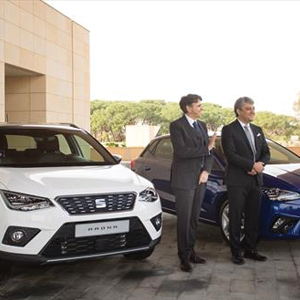 SEAT’s importer and the assembly partner of the Volkswagen Group in Algeria, met with Algerian Prime Minister Ahmed Ouyahia and Industry Minister Youcef Yousfi to discuss the future of the automotive industry in Algeria and the long-term collaboration between the country and the Volkswagen Group, following the Group’s inauguration of a multi-brand vehicle assembly plant in Relizane last July.

Luca de Meo’s visit to Algeria is framed within the brand’s internationalisation strategy. SEAT has an ambitious growth objective for upcoming years and North Africa, together with Latin America, plays a key role in this strategy.

With its strong potential, Algeria is at the centre of SEAT’s North Africa growth plan, and the company was appointed as the leading brand in the project to represent the Volkswagen Group’s plans in the country.

Additionally, this project plays a key role for SEAT, as this is the first time the brand assembles cars outside Europe, making it a major milestone for the Spanish carmaker. All the vehicles assembled in Relizane are sold in Algeria.

At the same time, SEAT targets promoting CNG (compressed natural gas) technology in Algeria, as it does in Europe.

It is indeed a sustainable alternative to traditional and electric powertrains. CNG emits 85% less nitrogen oxide than diesel engines, reduces CO2 emissions by 25% compared to petrol engines and eliminates almost all suspended particulates. In this sense, during his visit to Algeria Luca de Meo also met with Abdelmoumen Ould Kaddourla, the CEO of Sonatrach, the country’s major gas company.

After his meeting with the Algerian Prime Minister, the President of SEAT highlighted that “North Africa is a natural growth area for SEAT, which is currently in a phase of internationalisation. The inauguration of the Relizane plant in July 2017 marked a historic milestone for us, and this is the first time we are producing outside European borders. Here in Algeria, we are building cars made by and for Algerians. Today we are presenting the fifth generation Ibiza, and in the upcoming months we expect to begin assembling other models in order to meet the demand by Algerian customers”.

Mourad Oulmi, CEO of SOVAC and SOVAC Production declared that “the launch of SOVACProduction last July marked a new era for the automotive industry in Algeria, thanks to the partnership with the Volkswagen Group. Beyond a production plan rich in models, 2018 will see the launch of the second phase of SOVAC Production. We will start the integration and development of automotive subcontracting. We will encourage OEMs to move to Algeria and produce spare parts for the domestic market and for export. I would also like to take this opportunity to thank the President of SEAT Luca de Meo for having accompanied us, from the start of the Relizane project, with great encouragement, especially in training and logistics”.

The Relizane plant concludes 2017 with very encouraging results
SEAT is leading the Volkswagen Group’s production project in Algeria, not only in terms of coordination but also in volumes, since almost 50% of the total 2017 volume was generated by the Ibiza, one of the four Volkswagen Group models being assembled in Relizane. In the last half of 2017, over 17,000 cars were assembled there, including 8,121 SEAT Ibiza. Beginning this year, Algeria will consistently contribute to increasing SEAT’s commercial results. In 2017, the brand delivered 468,400 vehicles worldwide, which is 14.6% more than the previous year.

Just today SEAT President Luca de Meo handed over the very first fifth generation Ibiza assembled in the country to an Algerian customer. In addition to the Ibiza, SEAT is also keen to assemble the Leon and the Arona at the Relizane plant in upcoming months.

In order to develop and assemble new models in Algeria, SEAT aims to contribute towards creating an automotive supplier network in the country. In this sense, an event with suppliers at the Relizane plant has been scheduled together with SOVAC in the next few weeks.

Currently, more than 550 employees work at the Relizane plant. In the long term, up to 1,800 jobs are to be created. An estimated 3,500 additional jobs would also be created with suppliers and logistics service providers. SEAT is eager to seize opportunities and tap into the region, first by a transfer of knowledge. In order to ensure Volkswagen Group-wide quality standards, Algerian production, logistics and quality assurance employees were trained on site by experts from the Group brands. In addition, Algerian managers underwent a training programme lasting several months at the production locations of the brands. This train the trainer programme provides supervisors and managers with practical skills, enabling them to explain standardised procedures to their employees and train them in how to apply these procedures.

SEAT is the only company that designs, develops, manufactures and markets cars in Spain. A member of the Volkswagen Group, the multinational has its headquarters in Martorell (Barcelona), exporting 80% of its vehicles, and is present in over 80 countries through a network of 1,700 dealerships. In 2017, SEAT achieved worldwide sales of nearly 470,000 vehicles.

The SEAT Group employs close to 14,700 professionals at its three production centres – Barcelona, El Prat de Llobregat and Martorell, where it manufactures the highly successful Ibiza, Leon and Arona. Additionally, the company produces the Ateca and the Toledo in the Czech Republic, the Alhambra in Portugal and the Mii in Slovakia.