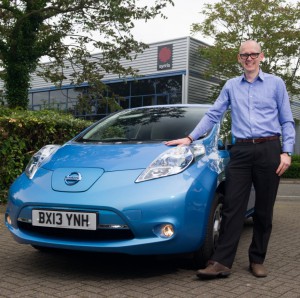 Used as personal day-to-day cars, the Leafs are expected to cover around 10,000miles per year as part of a two-year leasing arrangement.

Blacktrace Holdings are offering the option of a company car to employees across their companies if the proposed vehicle emits less than 110g/km CO2.

The 100% electric Leaf produces no CO2, qualifying for the company car scheme open to employees through a salary sacrifice arrangement.

As salary sacrifice is heavily affected by a vehicle’s BIK, the 0% BIK-rated Leaf was chosen as a cost-effective solution for Blacktrace Holdings employees.

Mark Gilligan, CEO of Blacktrace Holdings, said: “We’re a leading scientific company at the forefront of discovery and invention so it is fitting to offer our employees the forward thinking option of an electric vehicle.

“On a salary sacrifice scheme the 0% BIK of the Leaf makes it a simple decision for employees and they’re now enjoying the peace of mind that comes from driving a vehicle that emits no CO2.

“The enthusiasm of those who have already received their Leafs is rubbing off on their colleagues, as we have more employees ready to try the Leaf!”

Employees at Blacktrace Holdings trialled the Leaf alongside a Vauxhall Ampera, with styling, driver comfort and lower overall vehicle cost the key criteria.

“We look forward to providing further vehicles as their colleagues see the benefits of reduced running costs from a 100% electric vehicle.”

Blacktrace Holdings are a group of companies who create commercially-viable products from new scientific discoveries or inventions.