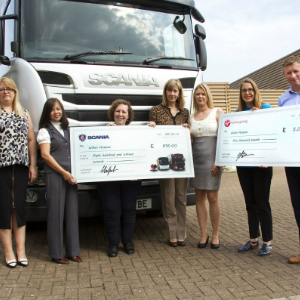 Staff at Scania (Great Britain) Limited’s Milton Keynes headquarters have continued their long tradition of raising funds for local registered charity Willen Hospice by donating a total of almost £6,000 already this year.  Many staff at the Tongwell-based company have been involved and a diverse range of activities undertaken.

David Hickman, Scania’s General Manager – Strategic Marketing, has raised £5,000 by running the London Marathon.  “I started running three years ago and said I’d never do a marathon,” says David.  “But I stupidly signed up for the London ballot and to my great surprise was selected!  So I started training in earnest and managed to complete the course in four hours and three seconds.  I’m extremely grateful to everybody who supported me, and I’m delighted to report that money is still coming in as a result.”  David has a personal connection with Willen as the hospice cared for his wife Deborah in the latter stages of her battle against cancer.

David’s colleague Louise Sampson, Scania’s Payables Manager, is a serial fund raiser who is constantly looking for new and innovative ways to support Willen Hospice.  “It’s been quite a year so far,” says Louise.  “We’ve had an Easter Eggstravaganza, baked and sold cakes, had a book sale, a raffle and a dress-down day.  We even sold off cardboard cut-out of characters from Star Wars, which were props left over from the company’s Christmas Party!”

All in all, Louise and her colleagues have raised £816 this year to date. “But we’re not stopping there,” she adds.  “Me and three colleagues – Julie Jones, Emma Bradley and Tanya Freestone – are all taking part in Willen’s Midnight Moo event on 16 July.  This involves setting off at midnight for a ten mile walk around a circuit starting and ending at Midsummer Place.  We’re having special capes featuring Scania’s Griffin logo made for the occasion – so do watch out for us!”

Willen Hospice, a registered charity dedicated to providing specialist end-of-life care and ongoing family support to people in Milton Keynes and the surrounding areas, is a grateful recipient of the funds donated by Scania staff.  “Scania has done a huge amount for us over the years,” confirms Tamsin Rawlings, the hospice’s Corporate Partnership Fundraiser.  “We need £10,000 a day to operate, which equates to £7/minute.  That’s a major amount for an independent charity and we depend heavily on the generosity of the general community and local companies.  On behalf of everyone at Willen Hospice, I would like to publicly thank the Scania team for all their good work for us over the years – long may it continue!”