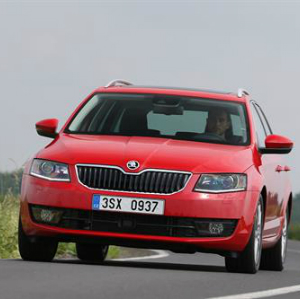 The 2017 range of ŠKODA Octavia models is becoming even more dynamic and efficient. A new high-tech, three-cylinder turbo petrol engine completes the engine range; adaptive DCC is optional for versions with 150 PS or more.

A turbo-charged, three-cylinder petrol engine has replaced the 1.2-litre, four-cylinder version. From its engine size of 999cc, the new 1.0 TSI produces 115 PS and provides 200 Nm of torque between 2,000 and 3,500 rpm. The first three-cylinder engine in the history of the Octavia has sophisticated acoustics and enables a driving performance that surpasses its predecessor.

In combination with 7-speed DSG, the new 1.0 TSI accelerates the ŠKODA Octavia hatchback from 0-62mph in 9.9 seconds and achieves a top speed of 126mph. Combined with a 6-speed manual gearbox, 62mph can be achieved in just 9.6 seconds. The ŠKODA Octavia Estate is also available with 7-speed DSG or a manual gearbox; with a 124mph top speed and 10.1 second or 9.8 second 0-62mph time respectively.

The biggest improvement, however, is to the new three-cylinder TSI’s fuel consumption, which is 8 per cent lower than that of the previous engine. The hatchback with 7-speed DSG can return 62.8mpg emitting 105 g CO2/km, while the manual gearbox lowers the latter to 104g/km. Choose the Octavia Estate and this increases to 61.4mpg (106g/km) and 62.8mpg (105g/km) respectively.

An optional aero package which further increases efficiency includes a lowered sport chassis, active air flaps, a tailgate or roof spoiler for further improved air flow and low rolling resistance tyres. Fuel consumption drops to 64.2mpg and the CO2 emissions to 102g/km in both the hatchback and the Estate with manual gearbox.

The new 1.0 TSI in the ŠKODA Octavia is state of the art in all aspects of technology. Its compact construction and aluminium crankcase mean the three-cylinder engine weighs just 78 kg. Its aluminium pistons and the forged connecting rods are balanced accurately, enabling quiet and smooth running even without the presence of a balancing shaft. In the entire crankshaft assembly, the rotating mass is low in weight and friction loss is minimal. The crank case and cylinder head have their own cooling circuits; the exhaust manifold integrated into the cylinder head forms an important component of the engine’s powerful thermo-management.

To improve the charge cycle, the inlet and exhaust camshafts can be adjusted by up to 50 and 40 degrees of crankshaft rotation respectively. The common rail system injects the fuel with up to 250 bar of pressure. The turbocharger’s intercooler is integrated into the induction tract, instantly increasing the boost pressure which can reach up to 1.6 bar (relatively).

The engine range with DCC: high performance
All ŠKODA Octavia engines are known for their outstanding performance and low fuel consumption. The following engines are available with adaptive DCC:

For the 2017 model year, ŠKODA is offering adaptive Dynamic Chassis Control (DCC) for ŠKODA Octavias with engines of a power output from 150 PS and above. This provides a more varied driving experience – DCC makes it possible to adapt the steering and suspension depending on whether the Comfort, Normal or Sport mode has been selected. DCC is also available in the ŠKODA Octavia vRS and ŠKODA Octavia vRS 230, where its functions include a more comfortable set-up for everyday driving at the push of a button.

An electronic valve controls the flow of oil within the DCC shock absorbers and a fast control unit operates the valve depending on the road condition, the driver’s driving style and the selected mode. A large cross section allows the car to ride comfortably; a small cross section enables the car to hold the road more precisely: the steering reacts even more accurately, braking characteristics are improved and body roll is minimalised. DCC also contributes to active safety: the system automatically switches from Comfort mode to Sport mode in hazardous situations and, in doing so, provides higher stability, better tyre grip and shorter braking distances.

The ŠKODA Octavia’s overall package has always provided a little bit ‘more car’ than its competitors by offering generous amounts of space and combining the elegant hatchback shape with a large tailgate. It offers outstanding interior space, rear legroom and headroom in the compact car segment. Both the Hatch and the Estate boast the largest boot within their class.

Just like every ŠKODA, the Octavia has many electronic and ‘Simply Clever’ features which make life easier for its occupants. In the new 2017 models, the Climatronic comes with an allergen filter, the optional rear-view camera is kept clean using washer jets and, from late summer, there will be an optional umbrella under the front passenger seat. iPads can be mounted to the front seats’ backrests.

New features of the infotainment system

The ŠKODA Octavia’s infotainment systems are part of the second-generation Modular Infotainment Matrix (MIB II) – they are easy to operate, versatile and powerful. Wi-Fi has been added to the Amundsen infotainment navigation system and some of the system’s functions can be controlled using ŠKODA’s Media Command app on a tablet or smartphone – an appealing solution for the ŠKODA Octavia’s rear passengers.

With new features, the infotainment system becomes even more extensive in the 2017 models. The optional ŠKODA Phonebox with wireless charging connects a smartphone to the car antenna by near-field coupling without the need for a cable, thus offering high call quality and best data reception. At the same time, it charges the smartphone inductively in accordance with the Qi standard, provided that the phone is technically compatible.