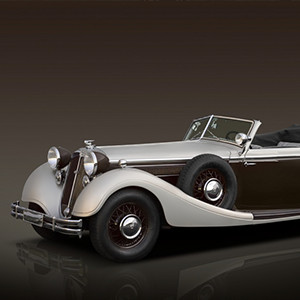 Confirming its place as this year’s must-attend UK Concours event, Salon Privé is delighted to announce the return of the Chubb Insurance Concours d’Elégance, as well as announcing early entries and confirming a full list of classes.

Kicking off Salon Privé’s three-day event, the Chubb Insurance Concours d’Elégance will take place on Thursday 31st August 2017 at the cherished and historic Blenheim Palace location. Attracting the rarest entries from around the world, this prestigious celebration brings enthusiasts together to admire world-class machinery from the most iconic manufacturers.

Salon Privé is delighted to announce two early entries to the first of the two Concours celebrations held during the event, including an elegant and rare 1939 Horch 853A Cabriolet, fresh from a four-year restoration, as well as a competition-focused, race-winning 1965 427 Cobra.

“We’ve been working tirelessly on the 2017 Concours Show Field and the standard of early entries already confirmed is once again improved. From the Cobra entered in the class ‘Classic Sports Racers against the Stopwatch’ with amazing race pedigree – which is certainly one of the best examples of Carroll Shelby’s racing legacy – to the freshly restored Horch 853A Cabriolet, which its owners are bringing from their collection in Germany to display on the lawns of Blenheim Palace. I think 2017 will surpass previous years in being our best Chubb Insurance Concours d’Elégance event to date.”

Born to race, in 1964 Shelby American decided to update the ageing 289 Competition Cobra, and set about producing 100 new 427 Cobras for homologation purposes. Unfortunately, AC could only build 51 cars at the time, and when the Federation Internationale de l’Automobile (FIA) inspectors realised they stopped the new Cobra from racing. Luckily for Carroll Shelby, in June of 1965, the FIA decided to juggle its classification system and a new class called ‘Competition GT’ was born, whereby the production requirement was lowered to 50 cars – coincidentally, one less than the number of 427 competition cars built at the time of the FIA inspection. Only 19 of the 51 built were turned into racing cars, while the remaining examples were converted for the road.

‘CSX3006’ is best remembered for its victory in the Ilford 500 at Brands Hatch on 8th May 1966, driven by the legendary drivers, David Piper and Bob Bondurant. Graham Warner, principal of the Chequered Flag race team stated that, “It was the only outright victory in an international FIA race ever achieved by an open Cobra, including the USA”.

One of only 19 pure 427 Competition Cobras and one of the first 427 competition chassis sold to a private team; Salon Privé is delighted that this rare 427 will be winging its way from America to take part in the Concours competition in its original white over black 1966 specification, as it was when it raced at Brands Hatch.

Another international entry confirmed, which currently forms part of a significant collection in Germany, is a distinctive and elegant 1939 Horch 853A Cabriolet, entered in to the ‘Graceful Pre-war Motoring’ class fresh from a four-year restoration.

The car’s first owner was German entrepreneur Hugo Poddig, owner of the Poddig Works in Berlin, who built his fortune in the construction of telescope antennae. After his death, his Horch, along with a collection of around 100 cars, was sold to Daimler-Benz AG, who displayed the collection at the famous Museum of Technology in Berlin in 1981. The current owner purchased the car in 2012, and spent the following four years painstakingly restoring it to its original condition – even finding and fitting the original engine to ensure its matching-number status – until it became part of the SK collection in August 2016.

Salon Privé is set to become the world’s first event to hold two Concours celebrations during the same event. With the addition of the inaugural Concours Masters, which will pay a ‘Tribute to 70 Years of Ferrari’, visitors will be able to see a timeline of 70 special and inherently different models from the Maranello-based marque. Concours Masters will complement the Chubb Insurance Concours d’Elégance, which now ranks as one of the world’s most prestigious Concours alongside Amelia Island, Pebble Beach and Villa d’Este.

Curvaceous Coupes from the 50s and 60s

Classic Sports Racers against the Stopwatch

Best of British at Blenheim Palace

Each of the ten classes will comprise of hand-picked cars or motorcycles, assessed by a select panel of internationally-recognised judges. The team, chaired by Derek Bell MBE, will scrutinise each entry on strict criteria of; history, preservation, style and originality. The Salon Privé jury is drawn from different areas of the automotive sector, ranging from respected marque historians and industry figureheads to world class designers and journalists.