On Sunday 18th October, 13 employees from MG Motor UK’s technical centre conquered 13 (plus 0.1) miles in the Birmingham Half Marathon for Macmillan Cancer Support.

The team of thirteen had been training hard in preparation for the run that took place through the streets of Birmingham’s city centre. The team were running for Macmillan Cancer Support and, with money still rolling in, they have managed to raise an impressive £5,700 – which is almost £2,000 over their original target.

The team leader for the baker’s dozen, Richard McAllister, said: “It was a great day all round, but my legs certainly aren’t saying that today! The weather held off for us making running conditions ideal.

“We were all really proud of our times, as we all had our own goals; even if it just meant getting round in one piece! The atmosphere was overwhelming with crowds of people shouting our names and cheering us along; it was exactly what we needed, particularly on really tough parts of the course!

“What also kept us going was the money we were raising for such a worthy cause. We’re so grateful to everyone who sponsored us; it helped push us that little bit further and will go towards helping people affected by cancer.” 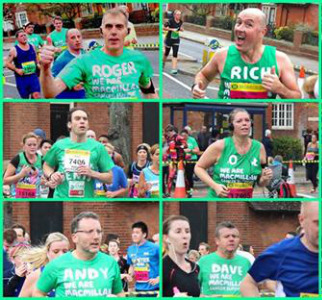 Anyone who would like to donate still can here: https://www.justgiving.com/teams/SMTC-UK