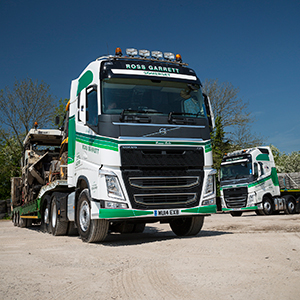 Ross Garrett report fuel consumption to be up to 8.1mpg on a mix of low loader plant haulage and platform trailer work, transporting concrete pipes for major construction projects.

Following the death, earlier this year, of the company’s founder Ross Garrett, his son Luke has run the business.

Luke Garrett said things were tough in the initial months after the death of his father, but the future is looking bright for the Somerset haulier.

“I like to give all our drivers a good spec truck,” said Mr Garrett.

“Alan has been with us for 16years so we felt we needed to provide him with a top of the line truck to show our appreciation.

“Paul used to work for my father, although he has been away for a number of years.

“After my father passed away, Paul made the decision to come back to us, so we allocated one of the new Volvos to him in appreciation of his decision to support us.”

One of the trucks is a 500hp, Globetrotter XL-cabbed 6×2 mid-lift, which is used to transport concrete pipes.

All the FHs are on three-year Volvo Gold Repair and Maintenance contracts, which include Volvo’s Uptime Assurance.

Maintenance is carried out at Truck and Bus Wales and West’s workshops.