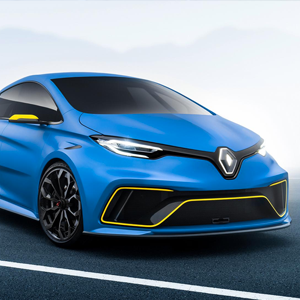 At the Geneva Motor Show, the Renault e.dams Formula E pilot drives a bright blue hatchback onto the stage, with Renault Senior VP of Electric Vehicles, Gilles Normand in the passenger seat. The two exit the car, and Prost demands to hear the specs. 0-62 mph in 3.2 seconds, 460 horsepower, certified for racetracks. It’s more powerful than his FE racer. “I’m not racing until I get one as a personal car,” Prost tells Normand.

The car is the Renault Zoe e-Sport Concept, and it’s a fine example of just how drool-worthy EVs can be. Europe’s most popular electric vehicle, the Renault Zoe, is known more for its practicality as an efficient city vehicle, but by giving it a ton of power and bolder styling, Renault employed the same formula that has created so many hot hatch fans over the years.

In addition to the flashy livery borrowed from Renault’s Formula E team, the Zoe e-Sport gets a carbon fiber body that help keeps the weight around 3,086 pounds despite almost 1,000 pounds of batteries. That lighter weight certainly helps with the impressive acceleration figure. Unfortunately, it’s a concept, and Renault hasn’t outlined plans to release performance versions of the Zoe anytime soon.

For those of us who aren’t Nico Prost, and will never have the pleasure of driving a French performance concept EV, the Zoe e-Sport is something for us to dream about. For Renault, it’s a demonstration of what the company can do with electric cars, and shows that even the simple Zoe can be turned into something fun. Let’s hope more of that thinking makes its way into some production EVs soon.