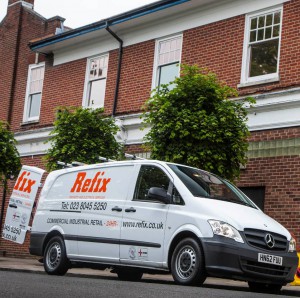 The Southampton-based company are now running five Extra-long Vito models, purchased from south-coast dealer Pentagon Commercials and racked out for use by electrical engineers.

According to Chris Mansfield – Managing Director of Refix – the key factor in the switch to Mercedes-Benz was the comprehensive and cost-effective backup offered by Pentagon Commercials.

“These vans are fully equipped with all of the tools, spares and access gear our engineers need to do their jobs,” he said.

“So it’s crucial that we keep them out there and working, because a courtesy vehicle is no good to us.

“That’s why the fact that Pentagon can service our vehicles through the night is so attractive – unlike our previous supplier it’s a commercial vehicle specialist and really understands the requirements of a business such as ours.”

Although this is the first time that Refix have operated Mercedes-Benz vans, Mr Mansfield also owns a camper van based on a Mercedes-Benz Sprinter.

The vehicle has been maintained by the workshop team at Pentagon’s Nursling depot.

“As far as they were aware I was a private customer with a single vehicle, but I’ve always been very impressed with their service and attention to detail,” he added.

“Pentagon’s sales executive Ian Burdett has also been admirably dogged in pursuit of our business.

“Our engineers love their new Mercedes-Benz vans and I have to confess that I had not fully appreciated previously how much better is their standard specification compared to our previous vehicles, particularly in relation to safety.”

The Mercedes-Benz Vito is equipped with an armoury of high-tech active and passive safety systems.

These include Adaptive Brake Lights which flash under heavy braking to provide an additional warning to traffic behind, and the latest ADAPTIVE ESP® system.

Alongside all of the anti-skid reassurance of the original ESP® system pioneered by Mercedes-Benz and Bosch, ADAPTIVE ESP® also determines a vehicle’s mass and centre of gravity.

This means it is able to intervene with even greater sensitivity and precision in critical situations.

“Our staff cover high mileages in all weathers and at all times of the day and night,” added Mr Mansfield.

“So it’s reassuring to know that we’re putting them on the road in the safest van in its class.”

Refix were founded in 1988 by Mr Mansfield and his wife Pam, providing maintenance services to an expanding portfolio of commercial customers throughout central southern England.